[HanCinema's Drama Review] "This Life Is Our First Life" Episode 5 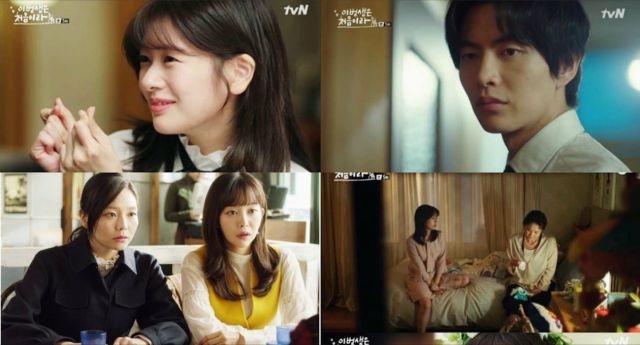 The extent to which Se-hee and Ji-ho are smart and organized continues to impress me. I mean sure, it's really sterile and weird that Se-hee has this whole check list of things they have to do to get married, but that's just how he thinks, in terms of narrow short-term objectives in service of broader long-term goals. This, in turn, explains how and why Se-hee and Ji-ho are able to expedite the process so effectively, if only because Ji-ho is very good at following his lead.

It's lucky they're such a good team, considering the parental issues they have to navigate. We already know Se-hee's mother Myeong-ja (played by Moon Hee-kyung), who came off as annoying in previous appearances. But Se-hee's father Hee-bong (played by Kim Eung-soo) rather changes our understanding of who Myeong-ja is. They got married while Myeong-ja was still a teenager. Myeong-ja's entire adult life has revolved around the life provided by Myeong-ja, so it's easy to see why the prospect of leaving that is terrifying to her, even as Hee-bong is explicitly awful.

But it also explains a lot about why Se-hee feels so emotionally withdrawn. Se-hee conceptualizes marriages as being inherently exploitive because that's all he knows. So that leaked out into the rest of his life, where Se-hee obsesses over making sure everything is fair, as in, he gives fair warning to people. This is also what Myeong-ja does, except that Myeong-ja is much meaner. So Se-hee avoids that too. Cue emotional repression.

It's also, as we see by the end, a surprising point of commonality that Se-hee has with Ji-ho. They both have domineering fathers and submissive mothers, the critical difference being that Jong-soo is merely brusque while Myeong-ja is explicitly abusive. Still, the parallels are obvious enough that when Ji-ho's mother Hyeon-ja (played by Kim Sun-young) drops a bombshell at the end, well, the emotional impact really is something.

Of course, while the whole parental dynamic is the main interesting thematic decision going on, I'd be remiss not to discuss how Soo-ji and Ho-rang are the best possible girlfriends. They're so laid back they don't even bother to dig into Ji-ho's story. They're just happy that she's happy. Also they have great banter. Those sections where they just make a big joke out of the weird title Ji-ho uses to describe Se-hee are fantastic. Really, if Ji-ho is going to discuss Se-hee in the third person, she needs a better word.

"[HanCinema's Drama Review] "This Life Is Our First Life" Episode 5"
by HanCinema is licensed under a Creative Commons Attribution-Share Alike 3.0 Unported License.