[HanCinema's Drama Review] "This Life Is Our First Life" Episode 7 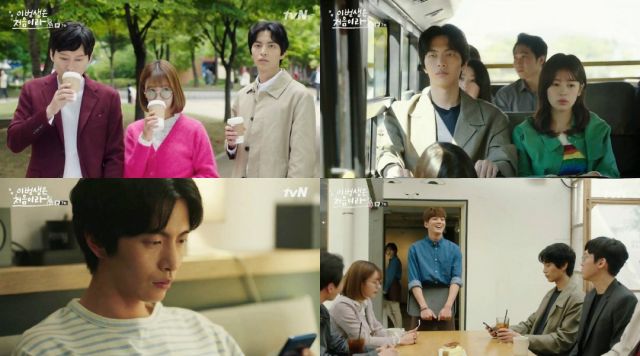 Bok-nam (played by Kim Min-kyu) is the second male lead alternate love interest for Ji-ho. His arrival is, all things considered, late, but definitely worth the late. He's Se-hee's opposite in every conceivable way. Bok-nam believes in the importance of fun and only living once. Whereas Se-hee is so obsessed with being supremely logical and sensible about everything most of his deadpan dialogue comes off as an unintentional joke. I liked the bit where Se-hee even explicitly says how long it will take him to pay off the debt, as if this is a somehow sane or normal answer.

But for all his obvious charms, aspects of Bok-nam also feel just a bit off- namely how Ji-ho tells him fairly directly that she is in fact married, yet this does not put Bok-nam off. Further exposition about Bok-nam, especially the scenes where Bok-nam's life philosophy directly chases with Se-hee's, only raises further questions. This all is an especially wonderful contrast with Bok-nam's sheer likability, which is treated with unquestioned reverence by every single character except Ji-ho and Se-hee.

This includes Soo-ji, who rather hilariously gets outraged by Ji-ho's initial descriptions of Bok-nam because they imply sexual harassment. For Soo-ji, of all people, to be concerned by sexual harassment is pitch perfect. But then again, as we see in context, Soo-ji is indeed enduring sexual harassment for a specific goal. There are stakes and risks to confronting this behavior. I loved how the ambuiguity of that situation was explored.

Elsewhere, Ho-rang attempts to needle Won-seok with passive-aggressive behavior. I like how bad Ho-rang's reasoning is here. As in, her whole idea for what they should do with the condoms is explicitly bad, and even dangerous, but it's symbolic of how Ho-rang is trying to make metaphorical arguments rather than practical ones for marriage. I really like Ho-rang and Won-seok- they're adorable, yet oh-so-immature, which is an impediment to their happiness.

It's a nice contrast to how both Se-hee and Ji-ho are logical to an extent that it seems like their happiness is questionable, yet for all their analysis, both seem happy right where they are. Not just Bok-nam, but also Se-hee's token female employee Bo-mi (played by Yoo Bo-mi) are great when it comes to asking simple questions that force Se-hee and Ji-ho to justify themselves, and I especially like how more than creating doubts in their convictions, Se-hee and Ji-ho seem to ultimately come off as more confident for having engaged with serious doubt.

"[HanCinema's Drama Review] "This Life Is Our First Life" Episode 7"
by HanCinema is licensed under a Creative Commons Attribution-Share Alike 3.0 Unported License.