[HanCinema's Drama Review] "This Life Is Our First Life" Episode 9 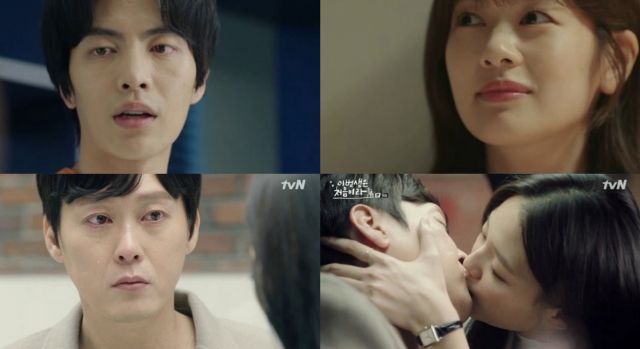 The main thematic thrust of this episode is about how men are actually really nice and sweet and emotional. This is pretty counter-intuitive considering we start out with a big news story about the arrest of a crazy psycho stalker, but then a lot of what we see here is about demolishing the dramatic assumptions of the previous storyline. I was quite pleased to discover I was entirely wrong about a certain plot point- it would seem that I underestimated screenwriter Yoon Nan-joong.

But before we even get that far, the most of what we see is just Se-hee and Ji-ho talking to each other about the events on Dongdaemun Gate. I love how over the course of simple, comprehensive conversations they both immediately realize where the other was coming from. This leads to the odd irony of how Ji-ho understands that Se-hee's actions were motivated strictly by practicality, yet still sees the subtle touches which indicate the man really does have a kind heart.

Then there's Song-goo's storyline- and we don't even see what his deal is until quite late. But I liked that, because it puts us in Se-hee's point of view. Simultaneously, we see that Song-goo has emotional depths that had never even been hinted at. Then we also see that, for all of Se-hee's bluster, the man really is a compassionate, empathetic friend. He even makes an offer to buy cake. Cake! You have any idea how expensive cake is?

It's funny how, even though Se-hee discovers to his horror that wrecking Bok-nam's bike was not as consequence free an action as he had assumed, overall the characters are slowly starting to care about money just a little less. And for good reason- it blinds them to the bigger picture. There's a subtle yet hilarious joke in there how for all their more paranoid suspicions apparently neither Se-hee nor Ji-ho had inferred that Bok-nam was the son of Ji-ho's boss at the cafe.

But then it did take Ji-ho a ridiculously long time to realize that Bok-nam was a person, not a dog. But that's just comic relief. The real emotional punch comes when Won-seok has a serious conversation with Ho-rang and right up until the last minute I, like Ho-rang, was wondering whether this was what it sounded like. Whether it's the performances, the direction, or the writing, it is amazingly easy to emphasize with all the characters in this drama.

"[HanCinema's Drama Review] "This Life Is Our First Life" Episode 9"
by HanCinema is licensed under a Creative Commons Attribution-Share Alike 3.0 Unported License.