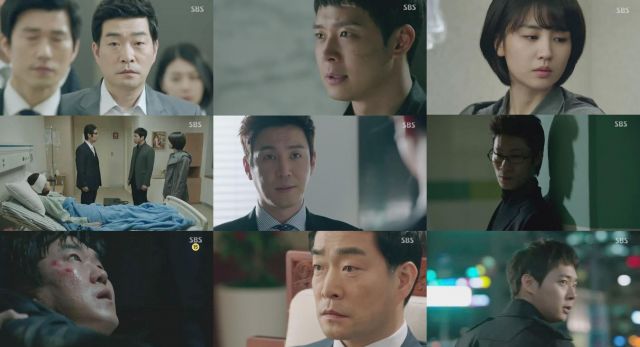 Nobody can trust anyone in this drama. Normally that would be good for a narrative about about political machinations and dark backroom deals, but unfortunately the narrative behind "Three Days" is just black and white enough that these plot points come off as belaboured. Do we really have to go through Tae-kyeong being paranoid about who to trust again. That gimmick is getting really old, mainly because he's always getting talked out of it so easily.

In a lot of ways the bad guys were actually doing Tae-kyeong a favor when they tried to bump off Cha-yeong. Had it not been for that incident Tae-kyeong may well have assumed that Do-hwi really has turned evil, given that he doesn't actually have any idea what's going on in the greater plot. It's strange to see a main character so detached from his own storyline. This drama goes over the conspiracy in great detail and yet we have almost no idea how this is affecting Tae-kyeong emotionally. Or anyone else, really, given that every character needs to be obscured just enough that we're not sure what their agenda is.

It's difficult to care about characters who can't even trust themselves, and it's annoying how this plotting gets in the way of some of the stronger points here. Bo-won's entire standoff in the hospital is great. The scene is intense and destructive, and the fact that nobody is falling the standard genre rules of being timid against the gun creates some genuine tension. People dying onscreen- now that's a threat I can identify with.

Strangely, for all the time the drama spends selling us on the finer points of the conspiracy, or the same retreaded emotional beats of how Do-hwi feels really terrible and Tae-kyeong feels really wishy-washy, it's the simple stuff that really connects. The build up to the next episode involves an explosive threat that could turn any immediate situation into a potential major crisis.

...Now, what does this have to do with the conspiracy? Are theatrics really going to help? At what point are people going to get suspicious about all the crazy stuff that's happening and think, hm, maybe something more complicated is going on here than just that the president is a bad person? That's another one of the weird places this drama takes us. It's easy to see what characters want on the individual level. Trying to guess what any of the background characters are thinking is, by comparison, terribly difficult.