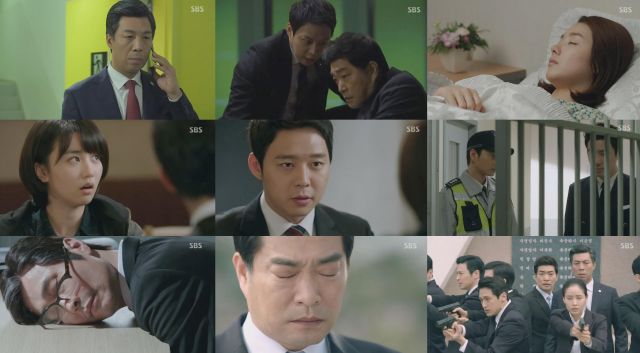 The assassination attempt ends pretty much the way every other assassination attempt has ended in this drama to date. There's a fakeout, an explanation of elaborate motives and scheming, and then we're right back to the same old situation. The secret service is stuck in a passive holding pattern while Do-jin's corporation is able to act with infinite recklessness to achieve whatever they want to do.

Remarkably this still manages to happen even though Do-jin is arrested. Yes, Do-jin comes up with yet another assassination plan, that is only mildly inhibited by the guy's being in jail. And I'm sorry, but this whole situation has gotten ridiculous beyond belief. Even assuming that the scheme works, nobody's going to blame the North Koreans at this point. I think most people are going to assume that if the President gets assassinated, while the main suspect for the most recent assassination attempt has escaped from prison...do I really need to explain it?

The most inexplicable part of this is that, if "Three Days" wanted to get legally pedantic, they could arrange for Do-jin to be on bail or something since there's no direct evidence implicating him. But his henchman? The guy who kidnapped Bo-won and Cha-yeong, a fact they both can testify to? Why isn't he in jail, let alone be in a position to break his boss out of prison? And how many cases of impersonating an officer do we need before characters start asking for ID?

What's worse, the story makes no business sense. Even if we assume that Do-jin is crazy, all of his underlings are insanely devoted to a basically evil cause that doesn't benefit them at all. It was dumb when this happened in "My Love from the Star", but at least in that case there were maybe half a dozen guys at most who were dedicated to the villain's increasingly obviously illegal plans. As far as I can tell countless employees of multiple worldwide corporations are totally cool with Do-jin's assassination scheme even though there's no possible way it could work- the previous corporate guys who Do-jin iced all but said as much.

Other stuff does happen this episode. We get some weak last minute love triangle stuff, and Do-hwi agonizes about all the terrible stuff he did in the backstory. Again. This episode is a mix of old material I was tired of and new material that has gotten progressively more moronic. The only hope for "Three Days" at this point is for the last episode to focus on action instead of plot. I am utterly sick of this drama's plot. Just give me something that's at least kind of fun so I can wrangle some enjoyment out of the finale.