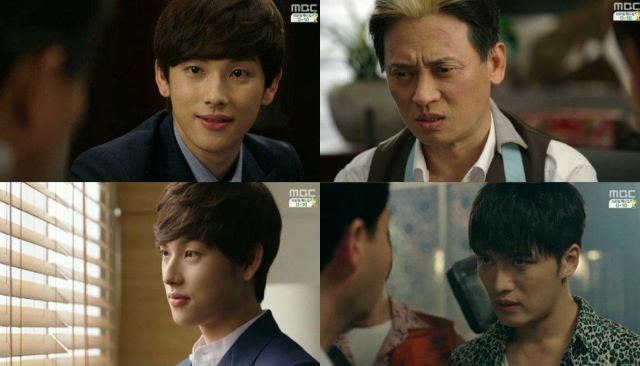 The best laid plans are all toppled down thanks to unforeseen circumstances. Well they're not really unforeseen circumstances. We know who all these characters are, we know they all have their own agenda, and we know that they like to keep secrets from one another because why not? But they don't know that about each other. So when an opportunity comes up for one to betray the other to help another, inevitably most of the cast gets blindsided.

It really is difficult to escape the drama's pervasive theme of gambling. Again and again characters lose on apparently sure fire bets because of outcomes they hadn't predicted. It's almost exactly like baccarat- specifically, the ridiculous gesture Yeong-dal does every time he wants to look at his card, doing it as slowly as possible, like that's somehow going to affect the outcome. Compare that to Yang-ha biding his time, only to have a temper tantrum when the plan doesn't go perfectly.

He really is a petty young man, taking all this so personally. But that does put him in good company with his brothers, as well as Bok-tae, who still nurses the wounds he took from that beating a few episodes ago. The characters are all about business and honor until an excuse comes up, then all of a sudden none of that stuff matters anymore. At this point Bok-tae and Yang-ha are succeeding on the strength of sheer inertia. It's as good a way to win as any but they're vastly overestimating the extent of their own personal talent here.

I'd refer to these general events as betrayal, but that would imply there was ever some sort of trust dynamic between any of these characters in the first place. Yeong-dal certainly has some camaraderie with his goons, and familial ties definitely have an influence. Beyond that though, everyone is just looking out for their immediate interests and not really considering the fact that they're in a dynamic drama with other highly motivated characters.

"Triangle - Drama" takes its time going over these events, though. Even though this is probably the most intense episode to date in terms of plot-related action, nothing really moves that fast or even necessarily that memorably. We get several small blow-ups and skirmishes until finally we run into the cliffhanger. And at that point it's just, well, now what? What was Yang-ha trying to prove anyway? Humiliation might seem fun in the moment, but it's no long term salve for whatever's bothering the young man.