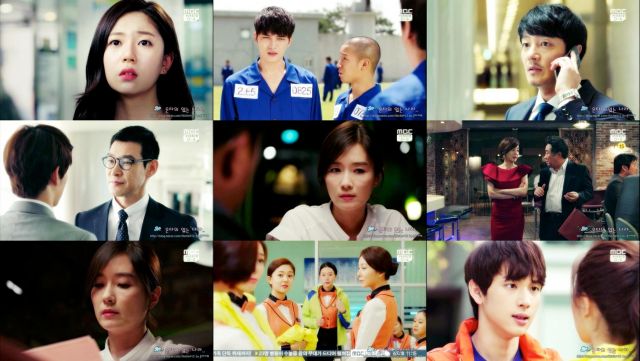 There's a nice contrast here between the physical appearance of the prison and Yeong-dal's attitude. So far as we can see, it's a relatively pleasant place. Outside people are playing soccer, and inside they're playing Go. Then Yeong-dal shows up and starts a fight for no reason. The man is deadset on living out his gangster fantasy wherever possible, and quickly learns that while prisoners aren't as vicious as they are in the movies, they still have very little patience for rude aggressiveness.

What's really sad about the whole situation is that Yeong-dal's partners in crime are clearly not as well prepared for prison life as Yeong-dal. They spend most of the episode whimpering and begging for mercy, even when they're not in any real danger. The way the story completely grinds to a halt here is- well, pretty much everything about the drama to date, actually, although the long awaited moment of humility for Yeong-dal certainly deserves time enough to breathe.

By contrast, Yang-ha clearly hasn't learned anything from his experiences, having apparently decided that he's won and is now free to go after what he wants- Jeong-hee. The way he ostentatiously throws his power around is very unbecoming, and makes his comparison to Yeong-dal all the stronger. Had the situation gone the other way, it's very easy to see Yeong-dal would be behaving in a similarly arrogant fashion.

Too bad for Yang-ha that Jeong-hee digs humility. I think that's what's attracting her to Yeong-dal in spite of all the warning signs. Yeong-dal is, by nature, constantly at the bottom of his luck. Regardless of whether his goals or noble ones or whether he'd at all be a decent person if he succeeded in them, it's easy to root for Yeong-dal and feel sorry for him. The man's main struggle at this point is realizing that just because he's the underdog doesn't mean all his actions are inherently heroic.

Outside the prison the main action comes in the form of Dong-soo resorting to less than ethical tactics in order to expose the situation to people who might be able to help out. Even though this is the most action-oriented part of the episode we get, I don't know that I was really all that impressed by it. "Triangle - Drama" deals with this incredibly elaborate interconnected character web, but most of the time not all of them can be exciting simultaneously. Which is as just as well, since they can't all be boring at the same time either.