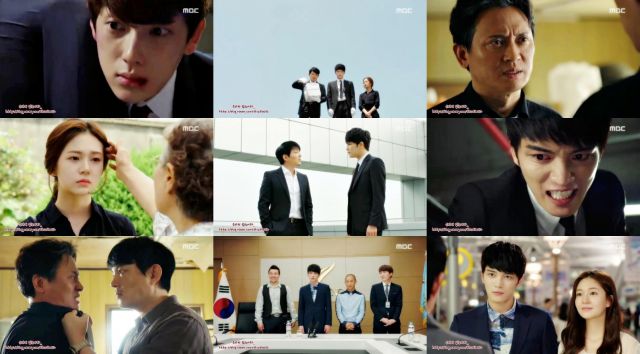 The drama's last interesting storyline question is resolved almost immediately. So, now that Yang-ha has been taken care of, how does "Triangle - Drama" spend its last hour? Not doing a whole lot I'm afraid. Bok-tae hides in a hole for awhile as the other characters try to figure out where he is. And I really do mean awhile- every possible trick is extended to stretch out this search, including a subplot about a minion Bok-tae has apparently been abusing this whole time?

Yes, there's that, and plenty of other plot points I didn't particularly care about. We don't even get much of a satisfying resolution to the Yeong-dal / Jeong-hee loveline. I know I was dismissive about this drama ending with a wedding earlier, but that honest to goodness would have been a significant improvement over what we actually ended up with. Yeong-dal achieves his dream of owning a casino? That was a stupid dream to begin with! I can't be happy with that!

I am also irrationally angry with the inconsistent way this drama portrays stab wounds. An actual planned assassination attempt wasn't able to kill Dong-soo, but an impulsive attack against Yang-ha proves fatal? Why? I know not all stab wounds are created equal, but I mean in storytelling terms, why was it necessary for Yang-ha to die? Literally nothing would change about any of the plot if he'd just landed in the hospital and wakes up right at the end in the epilogue.

It's all just a cheap emotional ploy to set up the stakes to make us hate the villains more- except at this point they don't really deserve hate because their antics are just so tiring. And if hate was something we were supposed to worry about, the bad stuff they've already done that's been gone over ad nauseum should have sufficed. As a result the ending is painfully arbitrary and dull, and I just kept checking the time impatiently waiting for it to end.

If anything doomed "Triangle - Drama", it was the awful sense of pacing, and the final episode is the perfect example of that. Throughout the entire run it's just been hurry up and wait. The drama would spend an interminable amount of time setting up certain plot points only to completely switch gears at the last minute and instead make this a story about some other character who we haven't even been paying much attention to. "Triangle - Drama" has been making an obnoxious point of jerking its audience around, and I'm glad to see it go.