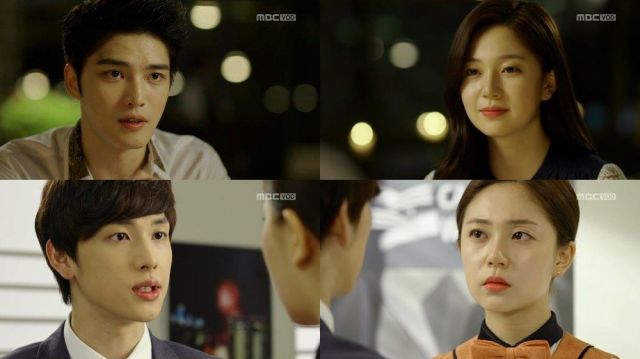 There's a fair amount of irony this time- let's start out in the romantic department. Yeong-dal makes some fairly standard loverly inroads on Jeong-hee. He's got himself a little money, so he treats her to a nice night, all that stuff. And all this time I kept wondering about Yang-ha. That guy's made of money. So why is it that Yeong-dal's pretensions at a high class life come off more impressively than Yang-ha's being the real thing?

Well, the drama doesn't go into a lot of detail in that department, which I appreciate honestly. "Triangle - Drama" can only really be appreciated from the big picture angle anyway, and for the sake of this particular narrative development, the irony alone is enough to be intriguing. Because Jeong-hee's overall attitude is actually a pretty reasonable one. Her last words to Yeong-dal are particularly sweet, because while there's a partial sense of sympathy, at the same time, we somewhat get the idea that Yeong-dal doesn't really deserve it.

The problem isn't that Yeong-dal's a bad person. It's that he doesn't seem to appreciate that gangster life is fundamentally dangerous and all but requires him to do bad things in order to succeed. The gigantic fight that takes up center stage this episode is a classic case of action and reaction. There's little sense that anything that happens here will actually matter- yet Yeong-dal still had to hurt somebody, and the gang's going to expect him to do it again.

Now, another possible interpretation is that Yeong-dal has to stay good with the gang in order to hide the fact that he's cooperating with Dong-soo. The trouble with that is that Yeong-dal knows full well that he's not really cooperating with Dong-soo, even if Dong-soo thinks otherwise. Aside from the obvious irony there, there's also the fact that Yeong-dal isn't really a police informer might in the long run make him a good one. He doesn't have to worry about a betrayal of conscience when right now he doesn't even have a conscience.

So for the moment this is pretty clearly Yeong-dal's story. More connections are forged with the other cast members, so at some point we might finally get to a deeper explanation of Dong-soo and Yang-ha. The only way anything interesting happens in this drama is as a result of confrontation- not necessarily a violent one, as the Yeong-dal / Jeong-hee date shows. Really it's just a matter of there being so many characters and only so much time in a single hour.