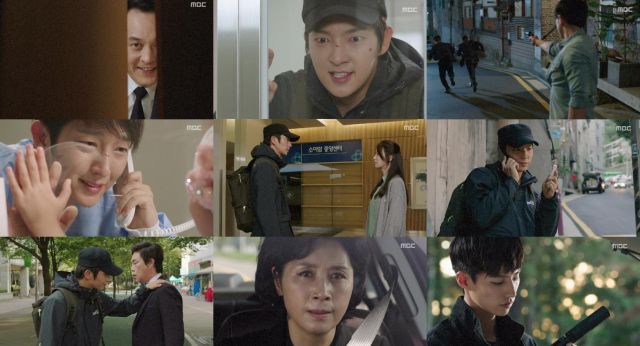 Il-seok's plans encounter serious resistance from very unexpected places. I'm still not particularly thrilled with the direction the last episode decided to take- but the drama manages to recover and resolve from them well enough to keep me from staying too angry. If a drama must go in a stupid narrative direction, at least it can try to recover from it quickly and move on to more interesting ground.

The trouble is that "Two Weeks" doesn't really have too much more interesting ground to move onto. There are only two episodes left, and after so many false starts we pretty much know exactly how Seo-hee and Il-seok are going down at this point, because there just isn't enough room left over that I can really see this drama once more heading through the motions of evidence either becoming destroyed or useless. And besides, Il-seok's antics at the possible at the very least should make it possible to pin some sort of legal charges against him.

The production values in the drama are strong as usual. There are confrontations and showdowns that inspire a lot of tension even if they aren't always particularly violent struggles. Unfortunately it just lacks the "oomph" factor that this drama used to have, because it's harder to imagine how it could escalate any further or go in a more unexpected direction.

It's a problem besides just the writing that I had with the ending of the previous episode. That entire sequence of kidnapping could have been believable if it was Il-seok's last desperate attempt to acquire and destroy the evidence- but that would have required it to happen next week. I can't imagine what Il-seok could possibly do next episode that would be more threatening than the dual kidnappings, and that makes it hard for me to feel excited about the drama's conclusion.

On a generally unrelated note, it turns out that helpful guy Chi-gook is played by Chun Ho-jin wearing semi-elaborate make-up. He gets a flashback this episode where he mentors a young child, and this is just the weirdest sensation because Chun Ho-jin is also starring in "Good Doctor" right now, and his role in the drama also involves flashbacks where he mentors a young child. This isn't really review-related, but the flashbacks in these two dramas serve such radically different purposes that it's a bit of a weird sensation to watch.