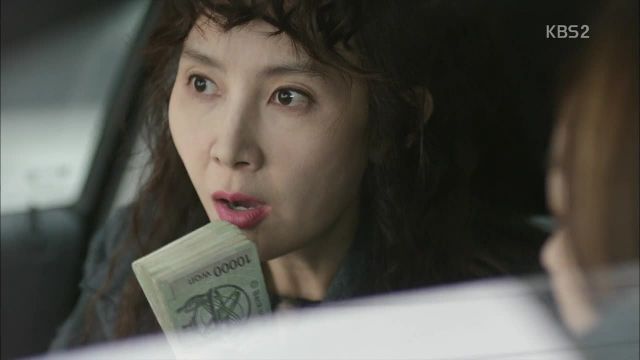 "Unkind Women" started in a fairly perfunctory manner, and yet, it had quite a bit of personality. This first episode is most definitely introduction and setup, but the humor and the music choices give it flair.

This drama is about three generations of women who suffer through hardship. The matriarch is cooking teacher Kang Soon-ok (Kim Hye-ja) and her two daughters, Kim Hyun-sook (Chae Shi-ra) and Kim Hyeon-jeong (Do Ji-won) are opposites in every way. Hyeon-sook is the more lively personality and the heart of this episode with her misadventures that bring financial disaster upon her family. Chae Shi-ra is utterly engaging as the wayward daughter who passionately works her way through life's seedier monetary endeavors in an attempt to do something right with her life. She is the best developed character in the litany of introductory scenes.

Jeong Ma-ri (Lee Ha-na), Hyeon-sook's daughter, also suffers a crushing career blow and meets her two love interests: Lee Roo-oh (Song Jae-rim) and Lee Doo-jin (Kim Ji-suk). Roo-oh is barely introduced while Doo-jin was painted in quite a charming manner. The uneven development presents certain characters as more important than others, which gives it an uneven tone. Each character was presented very systematically in a rather jarring way that did not function well with the overall tone of the show, which was that of a dark comedy. I do think that it needed to have settled into a stronger character. There was too much shifting between slapstick comedy, dark comedy, cartoon-like moments, and the tragic.

A strong point was the synchronization between the music choices and the dialogue or physical storytelling. Combined with the strong song choices, the music really breathed life into the episode.

I did enjoy this episode, but I can't made predictions for the future of the show based upon it. It was too flimsy in construction.