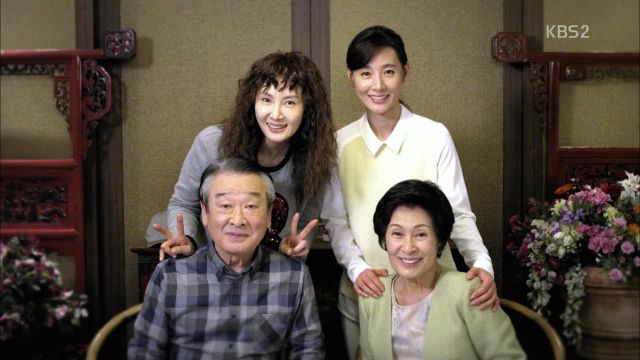 "Unkind Women" is one complicated show. Relationships are tangled into knots that can only be undone by major ego crushing - this will almost definitely take another ten episodes to resolve. What saves this episode from being too melodramatic are the family moments.

Hyeon-sook and Hyeon-jeong finally have their father back. The problem is that he is there in body, but not in mind. His attraction for Mo-ran is still there and continues to complicate his relationship with his family like it did in the past. Soon-ok chooses to lie rather than face it head on. Mo-ran chooses to intervene to assuage her own guilt rather than let the family heal. The wrong paths are followed, but people make mistakes - and those mistakes make for good K-drama.

I am annoyed by Mo-ran's selfishness, but that actually works with her cowardly character. I'm less aggravated by it than I was last episode. What is harder to digest is how Hyeon-ae is inextricably linked to Hyeon-sook. They are now doing battle through the romantic lives of their children. However, the evolution of their hatred for each other is a highlight of the show and I hope the insecurities they both feel that makes them mix as well as oil and water sort themselves through by the finale. To expect them to like each other is foolish; to expect that they learn to understand each other will mean good character growth.

The return of Cheol-hee has inspired Hyeon-sook even further to make something of herself. I like that she started to come into her own before he came. It was her own initiative that he helps along. The same is true of Hyeon-jeong who had hit a roadblock in her career and in her life. Moonhak found her and she began to like him and feel hope for the future again.

I think Eun-shil should be banished, but she's here to partner with the evil Hyeon-ae and make things difficult for Soon-ok's house of independent, struggling women. Characters like her are a writing copout. They are the easy way to create conflict. "Unkind Women" has enough conflict - internal, external - it doesn't need anymore.

There was a particularly lovely moment this episode when Cheol-hee decides to return to his family and try to be a part of them again. He calls his daughters in more intimate language than he had been using and it's so touching. The Korean language has very definite indicators of relationships built into it, and Cheol-hee dropped the formal speech and used the informal to call them - like a father would a beloved daughter. It was fantastically done.