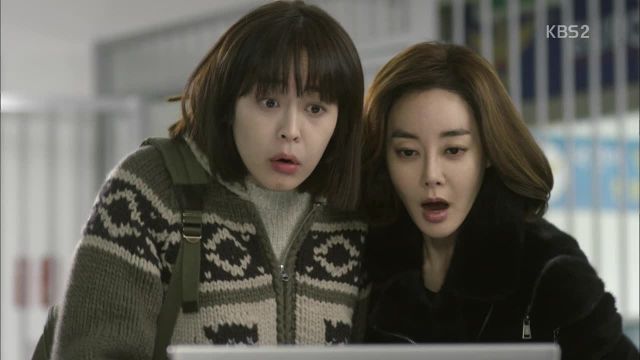 "Unkind Women" is zipping right along, feeding us backstory and humor and relationships that are full of heart. Although the story is a tad jumpy, the characters and their situations are easy to relate to and fun to watch.

Hyeon-sook continues to be the most engaging character with her quirkiness, fiery-temper and significant background information . Chae Shi-ra is vibrant as the youngest, very fallible,  daughter of a constantly grieving mother, Soon-ok. Chae carries the show. Her character's daughter, Ma-ri, has been filled out more as a character, mostly in the introduction of her romantic interests, but also in that she is a determined young woman who cares for her family.

The other women who are part of Soon-ok's family aren't as well-developed, which isn't surprising as it's only the second episode. But the writing could have been tighter to help the viewer relate more to each character who hasn't had the time to be developed. This is also a fault of the direction because the little moments can tell the most about a character. I want to see more out of Soon-ok and her oldest daughter, Hyeon-jeong, besides anger and weeping. Hopefully the introduction of Jang Mo-ran, the woman Soon-ok's husband left her for, will add to Soon-ok's character.

This show isn't about Hyeon-sook's failings, or the hurts of Soon-ok's past, or Ma-ri losing her job. It is about how these women overcome the obstacles of past and present together and learn to enjoy life. I see a few potential love interests that could help them learn to love and grow through relationships. There are also a few enemies from the past that crop up and need to be dealt with. There is a fine cast in place so these tensions should be handled well by those in front of the camera. The people behind the camera are those who will determine the quality of "Unkind Women".