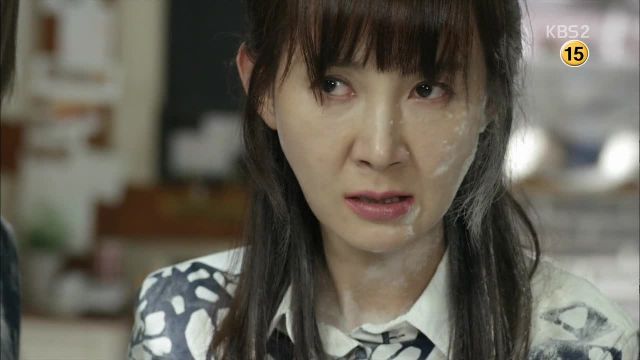 This episode was as disjointed as the last episode was cohesive - it jumped around all over the place! It was a desperate attempt to heighten excitement that ended in a mishmash of badly intercut scenes. There were some good moments, but the sloppy editing detracted from the juicier character beats.

There was a montage of scenes that cut from Hyeon-jeong and Moon-hak to Mo-ran and Soon-ok that were so poorly planned that it severed the flow of the story and instead seemed spastic. Hyeon-jeong and Moon-hak are a healthy couple that support each other, as are Mo-ran and Soon-ok, but the scenes did not compliment each other enough to warrant such hasty splicing. On top of that Mo-ran's sickness is coming back at the eleventh hour. It was always a possibility, but I had hoped it would disappear.

Doo-jin has also had a drastic change in character, which was actually overdue. However, he did it in such an uncharacteristic change that I'm thinking that the writer was desperately attempting to create some conflict. I don't understand why - there is plenty of conflict in this story. Take Hyeon-ae for instance. Her insecurities intigate so many fights. She just can't seem to quiet down enough internally to truly listen to other people, or to her own heart. Her desperation for recognition causes her to get in her own way, especially when her pride is wounded. Hyeon-jeong and Roo-oh constantly attack her, which I think is the wrong way to go with her. But it sure does make for some angsty drama on her end.

Hyeon-sook continues to grow up, learning how to help herself and help others. She's stepping outside herself and away from her pride. It's a lot like what her mother had to do after her husband "died". Her learning curve is wonderful and consistent. If only the plotline mirrored it.