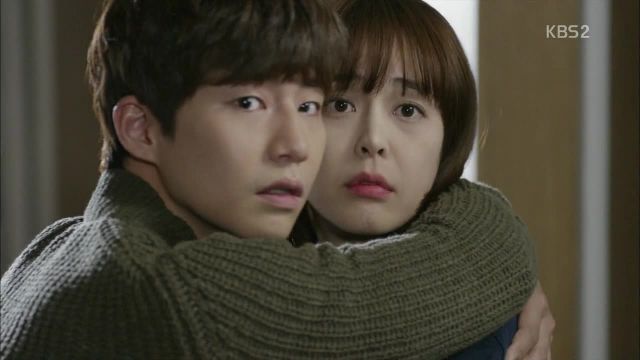 Twenty-four episodes may be too long for this show. It is just getting around to introducing the climax: a cooking showdown that will involve every main character in the drama in some form or another. The tensions in the show are more contrived than ever save for a select few.

One of those tensions is that between Hyeon-jeong and her father. She blamed her father for leaving them and returning without truly caring. Once she finds out how much he cares, she breaks down. She has been a wonderfully consistent character in her growth. Slowly, she has opened up to her family, to her fiance, and now to her father. She has always had the self-confidence that Hyeon-sook lacked, but wasn't as open as her sister. Now the sisters have taken on each other's best qualities. It's really lovely to see - plus their journeys to self-discovery are rather humorous.

Eun-shil, despite the guilt she feels, has convinced herself that she was justified. It's a path the guilty often take rather than admitting their sins and atoning for them. I like that the writer made the decision to make her learn from her mistakes the hard way. The same is true for Hyeon-ae. She may even be more hopeless than Eun-shil because she's older and has been hiding behind her insecurities for longer. The women in this show mirror each other, foil each other, and are great character studies besides just being plain ol' entertaining.

As for Roo-oh and Ma-ri, this prolonged storyline with the family tensions is starting to wear thin, but their couplehood may be the one thing that brings their mothers together. As much as they show of Hyeon-jeong and Moonhak enjoying time together and learning about each other is as little time they show of Roo-oh and Ma-ri doing the same. It is the only way the show can get away with throwing Doo-jin back into this romantic triangle. There is little substance beyond attraction in Roo-oh and Ma-ri's relationship, at least not much is shown on screen. They are very cute, but at this point cute can only take a relationship so far. Still, Doo-jin inserting himself back into the picture isn't the way to give this relationship a pick-me-up.

One this this episode did well was bring the family together and cast Mo-ran in a new light. She is no longer the other woman, but the friend who is talented at business and who is going to help Soon-ok pull out of her slump. The family teams up to do this and Hyeon-sook has found a direction in life because of it. Watching a family overcome is uplifting and the way this family has interacted has made it that much more satisfying.