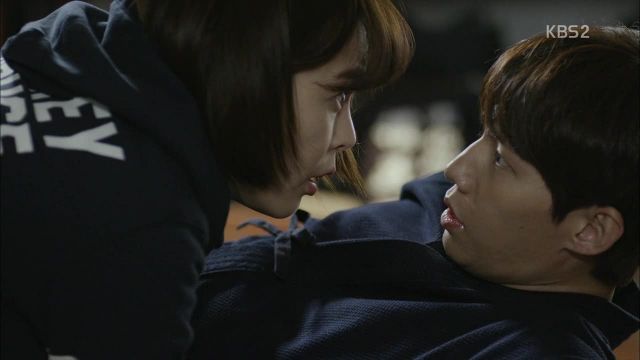 For the most part, "Unkind Women" is an engaging show. The relationships are fulfilling, the acting is relaxed, and most of the story, despite relying on the past, moves forward. There is one relationship triangle that drags the rest of it down: the relationship between Soon-ok, Mo-ran, and Cheol-hee. The entire situation is awkward and lacks the conviction of the other relationships and their situations.

Hyeon-jeong may have the earliest chance at redemption. Moon-hak, Doo-jin's uncle, seems to have a crush on her and seems to want to publish her as an author and make her successful. For someone on the straight and narrow like Heyon-jeong the change is difficult for her to fathom. But it would be good for her to branch out. I like that she's stepping into the story more. Until now she's just been a cranky older sister.

Roo-oh's courtship of Ma-ri is definitely adorable. Their relationship is the only pure relationship - at least I think so. Roo-oh likes her and woos her. There are no secrets or maltreatments or insidious back stories. I can't imagine that this won't change, but for now, the sincerity of the relationship is a great counter for all the pain seeping into the characters. Roo-oh and Ma-ri like each other, respect each other, have faith in each other. It's something that should be a part of Goo-min's and Hyeon-sook's relationship.

That marriage is breaking because he didn't fully support her and she thinks of herself as a subpar human being. Goo-min won't give up on her until she has faith in herself. I think they need more than that, but I do like that the story is addressing the issue of a broken marriage. One thing that highlights what Hyeon-sook needs, and it is something that we all need, is the incident when Mo-ran protects Hyeon-sook against Hyeon-ae's nasty tongue. It is the first time Hyeon-sook felt like someone was honestly by her side. She is not the type of person (yet) who can overcome on her own. Perhaps if Goo-min helps her in a similarly direct fashion, they can get back on track. I love relationships like this on television. They explore real inadequacies and emotional journeys.

Getting Doo-jin involved with investigating Hyeon-ae's torment of Hyeon-sook is going to be quite exciting. I want to see her get what she deserves, but even more, I want to see how the upright Doo-jin will tackle the dilemma. As he does so, I'm sure his relationship with Ma-ri will change and he'll become a contender for her affections.

This show is exciting. I like that it explores people at their worst, which is also when they can become their best.