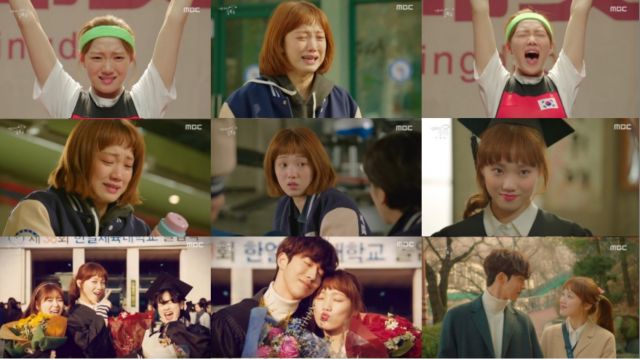 And now, for a final tension-free conflict in "Weightlifting Fairy Kim Bok-joo". Not that I'm complaining. There's a nice sense of constancy in how Bok-joo and Joon-hyeong can never get into a fight so serious it can actually really break them. Even at her most doubtful Bok-joo is more teasing of Joon-hyeong than she ever is genuinely mad at the guy. Besides, it's all for a good cause. Joon-hyeong's collusion with Bok-joo's dad and uncle was a nice way of getting the generally psychotic Chang-geol to accept Joon-hyeong without necessitating a serious personality clash.

Elsewhere subplots resolve very neatly and quickly. Dae-ho's closing line is ominous. Jae-i is able to wear Ah-yeong down a tad easier than seems reasonable. Tae-kwon gets his own ship to sail on for which the climax is unfortunately just an adorably cute movie theater scene. The coaches get exactly one line in the epilogue explaining what happened with them. Considering how many of these subplots there were, we couldn't really expect that much in terms of resolution.

But then, I'm OK with that, because the presentation was so very cute and optimistic. "Weightlifting Fairy Kim Bok-joo" was able to masterfully balance tone in such a way that every minor struggle the characters go through always had an appropriate sense of scale. When Chang-geol is being an idiot and not telling his daughter about surgery, he means well. That's what ultimately makes the resolution so plausible. Everyone has the same non mutually-exclusive goals.

The cast too gets a lot of credit for really embodying their characters. Lee Sung-kyung marks a powerful transition from the generally catty second lead roles she's done until now. When Lee Sung-kyung wears girly make-up at the close, I had trouble recognizing her at first. It's quite an adjustment in physical appearance, which thankfully becomes easy to ignore once Bok-joo starts talking and we see the generally gruff yet affectionate girl come to the surface once more.

"Weightlifting Fairy Kim Bok-joo" is among the best, if not the very best, coming-of-age stories I've ever seen. This drama takes the generally contrived episodic situation romantic comedy formula and really empowers it via sincerity, having its characters slowly stop doing stupid things by thinking about what really matters to them in life and reconciling that with their own quirks. The set-up is perfect for a college story, and even those of us older than that can take a lot of the drama's basic life lessons to heart.