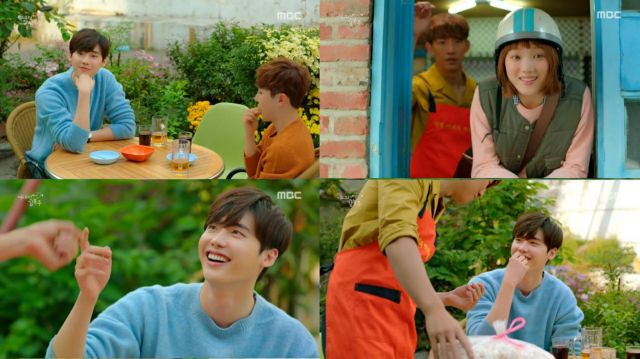 While I certainly wasn't expecting "Weightlifting Fairy Kim Bok-joo" to get to the romance right away, I also wasn't expecting Joon-hyeong to sabotage his relationship with Bok-joo quite so spectacularly. His attempts to be cute and endearing fail miserably because Joon-hyeong somehow does not understand what words mean. What makes this even funnier is that initially there seems to be merit to Bok-joo's assumption that Joon-hyeong is a jerk but no, further exposition makes it clear that Joon-hyeong really is just that stupid.

In general the characters of "Weightlifting Fairy Kim Bok-joo" remain endearingly idiotic, and the overall plot better shows this off by having them deal with external conflicts rather than fighting amongst themselves. Save for Si-ho (played by Kyung Soo-jin) we don't even see any rythmic gymnasts at all. The lack of villains makes it easier to appreciate the weightlifting squad for what they are- a bunch of teenagers who eat too much.

In addition to being fodder for jokes and adoration about how great Korean food is, the appetite of the weightlifting squad is also important in that it gives them all an opportunity to grow up. Food doesn't just grow on trees you know. OK, well, uh, it does, but...that's exactly the stupid gap in logical reasoning that makes it easy for "Weightlifting Fairy Kim Bok-joo" to vacillate between silly jokes and serious consideration of real-life responsibilities with no apparent whiplash.

The supporting cast really sells this too. Ahn Kil-kang takes on yet another dopey dad role as Bok-joo's father Chang-geol. Dae-ho (played by Kang Ki-young) is Bok-joo's uncle, who enables Chang-geol's dumber ideas. Coach Deok-man (played by Choi Moo-sung) and Coach Seong-eun (played by Jang Young-nam) struggle to hold the team together in the face of bureaucratic setbacks. You'll never guess which of these characters is, apparently, a Tsundere.

While "Weightlifting Fairy Kim Bok-joo" is thoroughly goofy and nonsensical, it does so through the imperfect perspective of a college athlete, which leaves most of the apparently absurd comedic set-ups feeling surprisingly genuine. Bok-joo is exactly the kind of person dumb enough to try and move furniture in the rain, for example, and she's still young enough to come up with and act upon silly childish romantic crushes. While Joon-hyeong and Si-ho flirt with idea of more serious adolescent angst, in the end, this is a drama that gives Lee Jong-suk a pointless cameo and still manages to leave a small on my face. Everyone's just so wonderfully charming, after all.