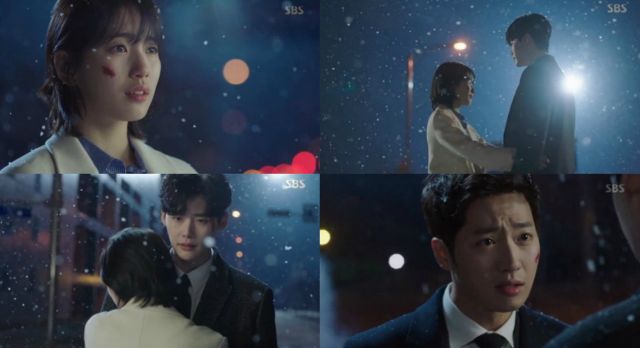 The big three dramatic beats in the first two episodes of "While You Were Sleeping - 2017" all involve car crashes. While at first glance this appears to throw "While You Were Sleeping - 2017" into the most laughable genre of South Korean drama clichés, there's surprising fatalistic depth here. In the first place, the drama sets itself up to answer the difficult question of how the generally sensible Hong-joo (played by Suzy) can fully choose to trust arrogant newbie lawyer Jae-chan (played by Lee Jong-suk).

Especially when we find out that Hong-joo already has a boyfriend- sensible, slightly older lawyer Yoo-beom (played by Lee Sang-yeob), who used to tutor Jae-chan, who was never an especially good student. But "While You Were Sleeping - 2017" makes a big first impression by noting, ironically enough, how first impressions are not to be trusted. Almost all of the expository information we get ultimately proves to be quite misleading, even if technically true.

Hong-joo's prophetic visions are the most obvious example of this. They throw crazy curveballs that seem specifically designed to guarantee that however Hong-joo reacts to them, doom is the inevitable result. Then, just when all seems hopeless, we get another curveball that's actually helpful. The immediate implication is that the visions work according to rules, albeit fairly esoteric ones, rather than the whims of writer Park Hye-ryeon. Note how the fate of Hong-joo's mother Moon-seon (played by Hwang Young-hee) hinges more on her actions than it does Hong-joo's, even as both have access to the same prophetic information.

But consider that more than the science fiction elements, it's the personal emotional ones that take real prominence. The irony here is that, the less logically people try to think about the dream prophecies, the more likely they are to successfully avert them. That's where we get back to Jae-chan, Hong-joo's trusted partner who she barely knows. The very existence of dream prophecies is an indication that there are factors at play in the world which she is not aware of. What if Jae-chan is one of those factors?

The thematic material here is crisp. The performances are excellent- all the characters so imminently, relatably normal, that the admission of new character traits, be they supernatural or down-to-earth, are simultaneously shocking yet eerily plausible. Besides that, the cinematography is gorgeous. Just take that light snowfall. It's beautiful both on the visual level, and the thematic one- the unexpected need not be inherently tragic.

"[HanCinema's Drama Review] "While You Were Sleeping - 2017" Episodes 1-2"
by HanCinema is licensed under a Creative Commons Attribution-Share Alike 3.0 Unported License.