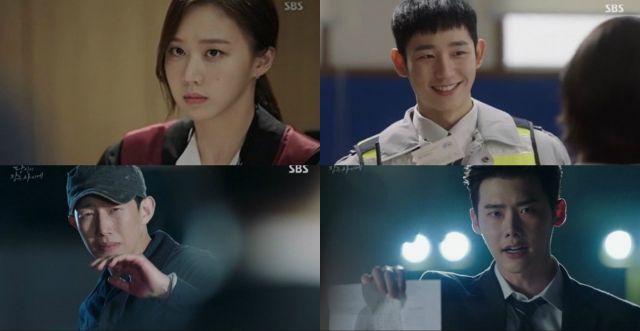 After the previous big lawyer storyline was resolved fairly realistically without having to go to trial, I was optimistic for writer Park Hye-ryeon's further legal plots. Unfortunately, the new case takes some massive steps backwards. First of all, the trial we see is obviously based on American jurisprudence. The notion of reasonable doubt, the 1% factor Yoo-beom keeps discussing, does not exist in South Korean law.

Although the whole case is so fundamentally flawed it's not even based on American jurisprudence so much as laughably inaccurate American lawyer dramas. The bad guy gets off on a very stupid technicality which doesn't actually invalidate the prosecutor's argument at all. Hee-min (played by Ko Sung-hee) presented a case emphasizing the suspicious circumstances behind the death, particularly the large insurance policy that had been taken out shortly before the so-called accident. The exact means by which he died is not terribly relevant to that argument, particularly since without an autopsy the only evidence for the alternate theory is the defendant's word, and he has an obvious incentive to lie.

It's odd how this very rushed storyline comes right on the heels of Hong-joo coming back to work as a reporter. A salacious case like this would be in the news cycle for weeks if not months, so that just calls more attention to the ridiculously short time frame in which everything happens. The domestic abuse case took much longer than this, and domestic abuse is not a capital crime.

Even the prophetic dream element is largely wasted. It's mainly just a contrivance to pull all three of the main characters into the same dangerous place at the same dangerous time as the very stupid conflict is forced into an equally stupid resolution. This is all done technically to maximize the dramatic factor since of course someone has to swoop in and save the day. But so what? None of these guest characters leave an emotional impact like the ones from the domestic abuse storyline did.

"While You Were Sleeping - 2017" is currently making a dangerous transition to being largely episodic without any actual overriding point. I just finished "Criminal Minds" and am really not in the mood for predictable and highly contrived murder mysteries. This drama has something so much better than that- chemistry! And cuteness! Look at Jae-chan tumble out of dreamland! Watch Hong-joo sing in the shower! That's the kind of relatable goofiness this drama excels at.

"[HanCinema's Drama Review] "While You Were Sleeping - 2017" Episodes 11-12"
by HanCinema is licensed under a Creative Commons Attribution-Share Alike 3.0 Unported License.