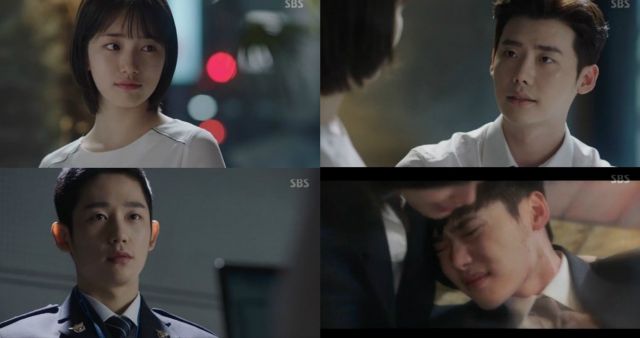 The perplexing creative decision to downplay dream prophecies in favor of flashbacks continues here. Honestly, my main takeaway so far is that the lead characters have rather shockingly bad memories, that they apparently went through all these traumatic events together as teenagers yet are incapable of recognizing one another in the modern day. It's not at all clear what these flashbacks are even building up to, given the generally vague connection to the current case.

That's another problem with how the dream prophecies have been de-emphasized. Without them, the script has to go into increasingly complex contrivances to relate the three main characters to whatever the current plotline is. What's so hard about just having a prosecutor, a cop, and a reporter team up with the power of their dream prophecies to prevent tragedies from happening? What backstory could possibly be more interesting than that?

"While You Were Sleeping - 2017" could also probably get away with just ignoring serious stuff completely for huge stretches at a time, since its moments of cuteness remain strong. My favorite character right now is the barista that Jae-chan and Hong-joo keep running into. Her whole perspective of their relationship is inherently funny, because of course she doesn't think Hong-joo predicts Jae-chan's coffee selections with magic powers. Obviously Hong-joo and Jae-chan just have an adorably charming romantic comedy style relationship.

Likewise, the breakfasts which all the main characters now go to are also inherently amusing, since everyone has to dance around their real relationships with each other for the benefit of Hong-joo's mom. Aside from the cuteness, the restrictions placed on that environment are such that it's one of the best places for characters to really express themselves without giving too much away. This builds tension, as it leaves us wondering when these characters are going to stop letting their love lives linger in the dream world and actually take decisive steps to make those prophecies happen.

That would certainly be an interesting twist- for us to find out that the dream prophecies are not necessarily predestined, but require decisive action on the part of the participants to actually enact. Unfortunately "While You Were Sleeping - 2017" really just does not seem all that engaged with the more intriguing aspects of its own premise. I mean, in all fairness the central mystery about the truth regarding Woo-tak's friend is fairly well-constructed. It's just, that's not the kind of genre fiction we were promised.

"[HanCinema's Drama Review] "While You Were Sleeping - 2017" Episodes 15-16"
by HanCinema is licensed under a Creative Commons Attribution-Share Alike 3.0 Unported License.