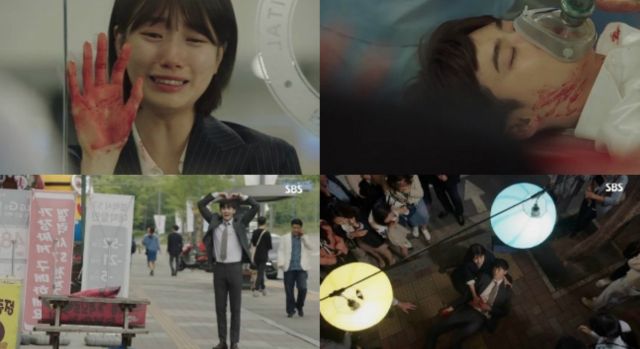 Hak-yeong (played by Baek Sung-hyun) is Woo-tak's old friend, who may or may not have murdered a minor celebrity. That question remains ambiguous even if the three main leads have concluded he was not responsible. At least, that would be my interpretation if the drama was not from their point of view. I mean sure, Yoo-beom is a sneak abusing the situation for his own ends but from a non-supernatural perspective he does make perfectly legitimate points about Jae-chan's questionable judgment.

Granted as a defense attorney Yoo-beom's position doesn't make a whole lot of sense. Because South Korea functions under a Napoleonic system of law, he should be all for a strict code of conduct under which prosecutors are reluctant to press charges, since burden of proof falls on the defense. I would think Yoo-beom's law firm would be rather upset about Yoo-beom helping to foster an environment under which prosecutors will quickly bring charges.

But aside from that obvious incongruity (especially since Yoo-beom was making the exact opposite argument last storyline to justify why he was defending an obvious murderer), there's a bigger philosophical problem at play. Yoo-beom is completely right. Jae-chan, and for that matter Hong-joo and Woo-tak, are making professional decisions on the basis of personal relationships. Such accusations of collusion, especially in the current South Korean political environment, are not something to be taken lightly.

So it comes off as very bad taste when "While You Were Sleeping - 2017" runs comedic setpieces based around public outrage regarding Jae-chan's actions. A reference to free speech zone laws is especially awkward. But then the social and technical elements of the case are filled with such massive logical pratfalls I could go on about the subject indefinitely. When the explanation for the weird blood pattern shows up, what we're mostly left with is more questions about how the investigation was conducted.

Such as, the fact that the victim had a medical condition is pretty critical information that appears to have been withheld from us for no apparent reason. I'm left wondering why anyone jumped to the conclusion that a murder took place at all. As the domestic abuse case so memorably pointed out, most people do not see an injured person and immediately start working under the assumption that foul play was involved. Mind, for all these logical problems, "While You Were Sleeping - 2017" is far from unwatchable. It's just reminding me more of "Criminal Minds" than I would like.

"[HanCinema's Drama Review] "While You Were Sleeping - 2017" Episodes 17-18"
by HanCinema is licensed under a Creative Commons Attribution-Share Alike 3.0 Unported License.