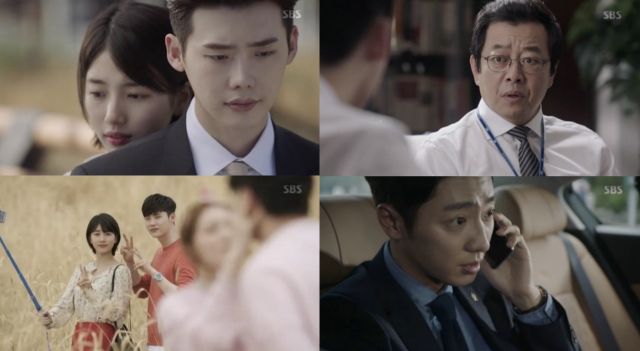 Last storyline, a woman with a medical condition falls at home and hits her head on the table, prompting police, doctors, and the press to assume that the delivery boy murdered her. This storyline, a man with his arm in a sling publically accuses a professor of illegal acts, and shortly thereafter falls down an elevator shaft that had to have been physically pried open with two working hands. So naturally, police, doctors, and the press all assume it was an accident.

There's a fine line between writing simply being bad and it being moronically, aggravatingly stupid. "While You Were Sleeping - 2017" is now firmly in the latter category. The entire premise here is so inherently idiotic my brain wanted to shut itself down simply as a defense mechanism. I was in full on yelling at the TV mode when Yoo-beom started talking about a possible criminal defense- although I won't bother discussing the logical problems with that plot point until the trial actually starts.

Instead, most of the runtime here is focused on the moral conflict of whether an autopsy should be ordered when the victim's organs could be used to save people's lives. OK, in the first place an autopsy isn't necessary. The fall is obviously what put the poor young man in a vegetative state. The main relevant evidence is nothing inside the body but the strangulation marks on the victim's neck, which would have the professor's fingerprints on them and would have been immediately obvious to the doctors who operated on him.

In the second place, acting like this is Jae-chan's decision to make is nonsensical. It's the victim's father's decision. The idea that public bureaucrats could or should be involved in these processes is an even bigger ethical problem than Jae-chan being friends with a guy who was friends with the suspect last storyline. And lastly, I did some research. Autopsies and organ donations are not mutually exclusive propositions. To the contrary, everything I'm reading implies that both could and should be done at the same time.

So in between an inherently preposterous premise and completely false ethical dilemmas, is there anything this episode does correctly? Well, Jae-chan and Hong-joo are cute together. The cameo with Yoon Kyun-sang and Lee Sung-kyung in the field was pretty funny. That's really about it- even the dream sequences are, as expected, pointless. They just bring up possible conclusions to the story arc that we could have easily predicted ourselves.

"[HanCinema's Drama Review] "While You Were Sleeping - 2017" Episodes 21-22"
by HanCinema is licensed under a Creative Commons Attribution-Share Alike 3.0 Unported License.