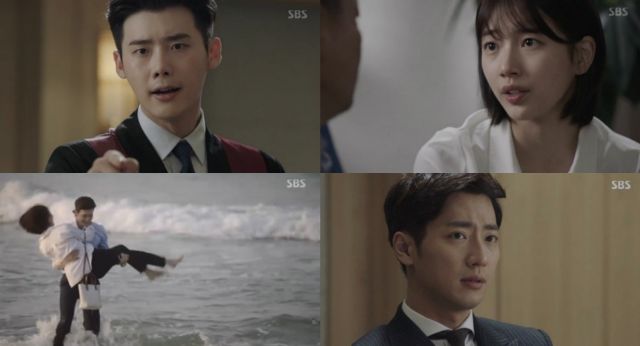 There's a strong emotional scene where the father of the soon-to-be-dead victim cries when his son is finally taken off life support. That scene immediately made me realize that, rather than the explicitly contrived binary choice between autopsy and organ donation, "While You Were Sleeping - 2017" could have instead done a more traditional, dad doesn't want to take his son off life support because of imaginary hope that he'll wake back up. While not terribly original, such a plotline would have at least been plausible.

I'm starting to wonder where the sudden startling drop in the writing quality in this drama is a consequence of writer Park Hye-ryeon being too creative. With the first two storylines, this worked because those were fairly novel ideas with constant running plot twists. Unfortunately, now that "While You Were Sleeping - 2017" is just being a crime procedural, there aren't any more opportunities for plot twists, and there are fewer ideas that haven't been done before.

Which is, I assume, how we get to the ridiculous moment where Yoo-beom suggests that his client can't be guilty of murder because the father pulled the plug. Jurisprudence from centuries ago has held that someone who commits an act that directly leads to a person's eventual death is murder even when the technical cause of death is, say, medical malpractice. That's not even getting into how murder, as opposed to mansalughter, is a crime that is prosecuted based on intent.

So even assuming Yoo-beom's ridiculous technicality was accepted, his client would still be on the hook for attempted murder, since no other reasonable outcome could be expected from pushing an injured man down an elevator shaft. Beyond that the case is also aesthetically boring. It seems like the whole thing will hinge on the child's testimony but then we find out there's so much evidence they don't really need him anyway. This makes last episode's conflicts of autopsy versus organ donaton and are we really sure this was an accident seem even more ridiculous in retrospect.

Did I mention how the entire premise of prophetic dreams is completely wasted yet again? We actually get more flashbacks to Jae-chan and Hong-joo's tragic teenage years when they forged a bond they apparently completely forgot about as adults then we do the drama's actual main concept. Even a minor plot point about colorblindness comes off as more distinct than most of the increasingly awful storytelling that now characterizes this drama.

"[HanCinema's Drama Review] "While You Were Sleeping - 2017" Episodes 23-24"
by HanCinema is licensed under a Creative Commons Attribution-Share Alike 3.0 Unported License.