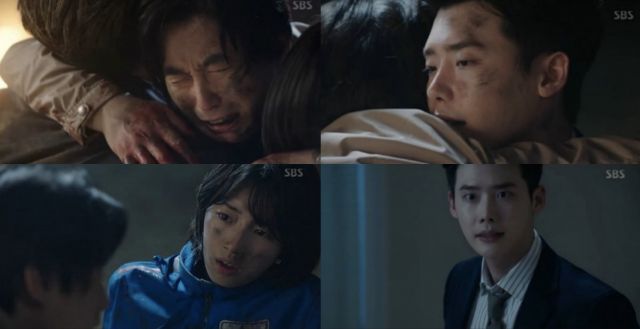 The only dream premonition we get this time takes the form of an episode preview. At least, that's the only way I can think of to interpret it, since it seems designed entirely for our benefit rather than that of the main characters. It's a pretty specific premonition too, one that you'd think would be easy to avert. Jae-chan and Hong-joo just need to avoid going to suspicious places in the middle of the night alone.

Remember in the early episodes of "While You Were Sleeping - 2017", where experimentation was a big factor? How the lead characters would use both small and radical behavioral changes to change obviously horrific outcomes? That element was a big part of why I loved those early episodes so much, because we were left constantly guessing as to how such oddly specific premonitions were going to play out, let alone be altered, and the explanations always turned out to be both copunter-intuitive yet ultimately logical.

Whereas now? This is just bog standard investigative procedural stuff. Honestly, this storyline plays out like the first episode of a far more generic and less interesting drama. Little use is made of the three main characters' preexisting relationship. Hong-joo's newsroom has to concoct a puff story just to get her inside the prosecutor's office at all, and her main purpose there is not to sniff out clues about the case, but to do a story about how awesome Hee-min is as a woman prosecutor.

Most of the screentime doesn't even have anything to do with the case at all, it's just general comic relief. I guess the comic relief is passable. But it's rather awkward to transition from laughing about one of Hong-joo's co-workers having to wear a pregnancy jacket to realizing that, oh yeah, there's a serial killer running around who's going to take a shot at Jae-chan and Hong-joo.

And even that ending manages to be rather anticlimactic, since the completely preventable situation of being locked inside a burning building ends up being solved by a deus ex machina- and not even one related to the dreams, which would have at least been relevant. No, it just so happens that another random character happened to be at the right place at the right time to save them. While I can see what the production team is going for in terms of a redemption arc, this was a very horribly clumsy way to go about starting it.

"[HanCinema's Drama Review] "While You Were Sleeping - 2017" Episodes 25-26"
by HanCinema is licensed under a Creative Commons Attribution-Share Alike 3.0 Unported License.