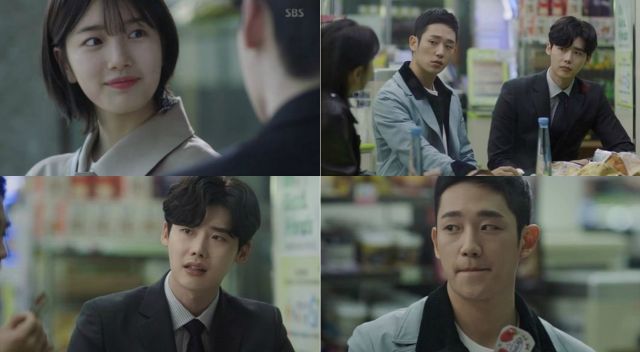 For a side story character, So-yoon is surprisingly compelling. Observe how, while being completely sympathetic herself, So-yoon embodies both of her parent's flaws. Like her father, So-yoon is inclined to fly into a rage at other people defying her, regardless of who's at fault. Likewise, So-yoon also shares her mother's unfortunate propensity toward magical thinking. Hence, Seong-won and every other central character gets dragged into So-yoon's story, to their detriment.

Then again, Jae-chan signed up for this when he decided to become a prosecutor. I rather like how unexpectedly realistic "While You Were Sleeping - 2017" is when it comes to ideas like prosecutorial misconduct. It's not that Jae-chan's co-workers are evil, or even badly-intentioned. They're just obsessed with appearances and trying to be polite and respectable. That such behavior enables domestic abusers who are sufficiently well regarded publically is a horrible but completely accurate real-life irony.

This plotline, along with the flashbacks explaining how Jae-chan became determined to run this career path in the first place, emphasize the man's sense of normalcy. That's great in a hero- it shows how Jae-chan is not perfect. He has to struggle against his worse inclinations to do the right thing. This allows Yoo-beom's presence to loom large even when he has little screentime, because that's the boon offered by his evil. Yoo-beom removes short-term inconviences at the expense of long-term ethical scruples.

Elsewhere, Woo-tak (played by Jung Hae-in) takes more prominence. You may remember him as the guy who was saved by Jae-chan's rash actions in the opening episode. Here, his relationship to the prophetic visions is increasingly better defined. In the first place, as a police officer, Woo-tak has inherent authority that Jae-chan and Hong-joo lack. Also, his take on the visions is more analytical.

Is this good or bad? So far, Woo-tak is helpful. But I can't help but notice a thematic intersection here. Hong-joo focuses on the details, Jae-chan focuses on the outcomes, and Woo-tak thinks about the best way to carefully game the rules. Of course, all of these focuses are pretty essential- "While You Were Sleeping - 2017" makes a point of how accurate powers of prophecy are actually quite difficult to use in a complex real world context. And that's before getting into subjective issues. Consider how all three characters assume from their visions that Seong-won did indeed commit a crime- when in fact, the full story makes it seem unlikely that he ever would have been convicted of anything.

"[HanCinema's Drama Review] "While You Were Sleeping - 2017" Episodes 5-6"
by HanCinema is licensed under a Creative Commons Attribution-Share Alike 3.0 Unported License.