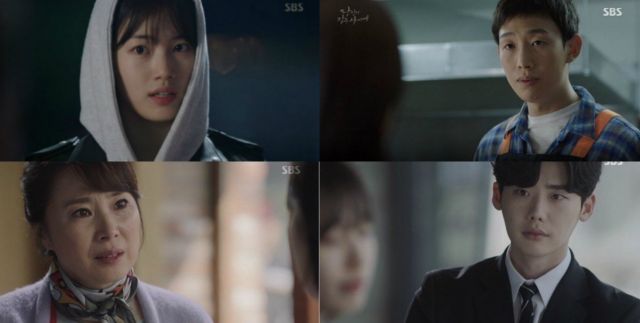 Now that the last major crisis has passed, Hong-joo comes off as kind of creepy. In the absence of genuine threats, she just harasses the guy at the chicken restaurant and pre-stalks Jae-chan at work. While this behavior can sometimes be cute, what we're left with is the impression that Hong-joo really needs a hobby. Or even better, a job that makes relevant use of her inherent nosiness. Cue backstory, where it's finally explained what Hong-joo's previous profession was, and why she quit.

In short, the Hong-joo we see now is really her original form- confident and peppy. She just never came off like that before because until Jae-chan proved that sufficiently extreme behavior could alter her disastrous predictions, Hong-joo just lived in fear and tried to hold back. Aggressive Hong-joo is heroic, but frightening, mainly in the sense that we're left worrying about the danger she puts herself in, thinking only about how to save lives rather than actually explain herself.

The unfortunate effect of this is that Hong-joo kind of comes off like a damsel in distress, even if she is by far the most proactive of the three precognitive characters. Problematic tropes notwithstanding, we do see more of a method to the madness. The predictions work in cycles- different characters receive different visions based on changes in behavior prompted by previous visions. It is only because Hong-joo takes initiative that there are conflicting visions at all.

While that works well enough for solving the relatively mundane bad endings Hong-joo and Jae-chan receive, we're still left with an obvious weakness. What if three cycles of prophetic dreams are not enough to inspire an actual solution? Observe how the main "antagonists" here are brutish college aged youths who are incapable of reading feminine body language. But even they're physically dangerous. What happens when the three leads run afoul of a character with more complex characterization than that?

Further amplifying the tension is how Hong-joo herself is well aware that, recent advances in dream interpretation not withstanding, she is all too mortal and quit her dayjob out of legitimate fear of self-preservation. Of course, it's that very quality which makes her a compelling protagonist. Hong-joo is charging into situations ignorant of the true danger, with only blind faith in Jae-chan and Woo-tak offering any form of succor. The woman's definitely got guts- i have to give her that much.

"[HanCinema's Drama Review] "While You Were Sleeping - 2017" Episodes 9-10"
by HanCinema is licensed under a Creative Commons Attribution-Share Alike 3.0 Unported License.