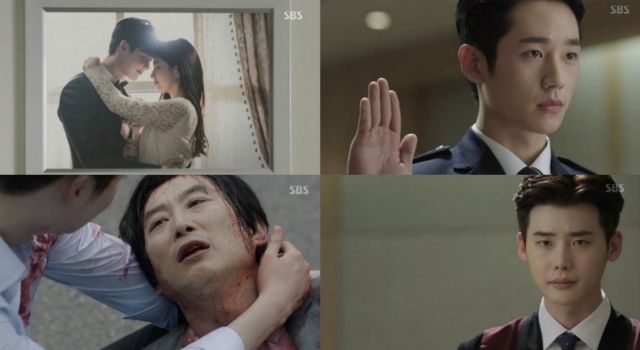 Jae-chan doesn't really have much of case against Yoo-beom. Even if he can prove that Yoo-beom is lying about Joo-an having drugged him too, Joo-an is a serial killer with good reason to want Yoo-beom dead. So Yoo-beom could still claim self-defense, arguing that he was just trying to preserve his reputation with the lie. That Yoo-beom eventually ends up getting sent to life in prison for a completely different crime underscores this. So what is the huge trial actually about?

Well, remember how Woo-tak is color-blind? As it happens the exact circumstances of the case are specifically laid out in such a way that Woo-tak has to out himself as color-blind in order to convict Yoo-beom. Woo-tak doesn't actually have to do this, there are maybe half a dozen different ways that this situation could have been avoided. But since no one is in plausible life threatening danger anymore that's the only way "While You Were Sleeping - 2017" has to manage dramatic stakes is by threatening Woo-tak's job.

The key word there is plausible. There is an extended death scene here, which was even more preventable than Woo-tak's inevitable heroic resignation. Why? Because of the dream prophecies. Remember those? The means by which the main characters could predict horrific outcomes and try to prevent them? Time was the main appeal in "While You Were Sleeping - 2017" was the way altering those predictions became a logical puzzle for the leads.

Whereas now? We're just left with tacky extended wedding scenes. And no, it is not a wedding between the two characters we would most logically expect to get married. Their wedding is just held off-screen for some reason. No, the wedding we get is between two minor characters who had some screen time together way back during the obviously accidental case of a man falling to his death in an elevator shaft.

I don't know what's more irritating. That "While You Were Sleeping - 2017" felt the need to slip in yet another potentially interesting undeveloped subplot in the final episode, or that Kim So-hyun gets a prominent cameo, reminding me of a time when this drama had much better writing and nearly limitless potential with the premise. Although as usual the main problem is the way any potentially interesting storyline development has its screentime completely gobbled up by the endless flashbacks and references to that soldier's AWOL rampage, a story that gets less interesting every time it's repeated.

"[HanCinema's Drama Review] "While You Were Sleeping - 2017" Final Episodes 31-32"
by HanCinema is licensed under a Creative Commons Attribution-Share Alike 3.0 Unported License.