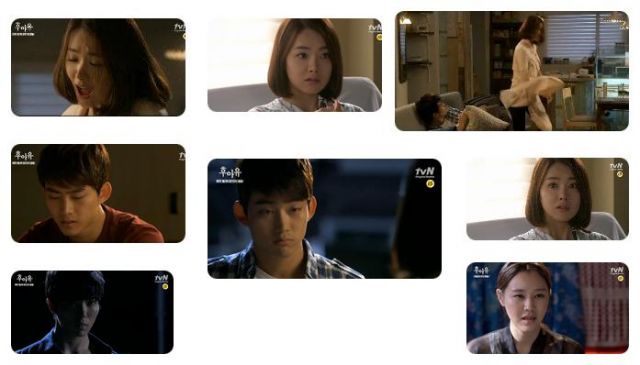 This episode is sad. Not excessively, sentimentally so, but most of it deals with the stark reality of coming to terms with death, and there isn't really any fun way to discuss that. The usual questions still come up- I find myself wondering how Si-On gets anyone to talk to her. We're always skipping the parts of these conversations where she introduces herself to strangers. What does she say anyway? "I'm from the Lost and Found, my job is to find random people who might know who owns these random objects"?

Yes, the function of this particular branch of the police department is, as always, not totally clear. And there are still those moments sprinkled about of characters engaging in questionable activities during working hours. There's this fun scene where one character is mopping the floor- doing real, actual work, and another is quite obviously not working. I suppose some minimum appearances must be kept up even when the superior officers aren't around.

Unintentional comedy is still interspersed a bit, as our heroes once more have a run in with an incompetent gangster. Just one this time, but this particular gangster proves more dangerous than the giant mobs we'd seen earlier for a reason which I don't want to ruin. Let's just say that it's a bit of real world logic that's been completely absent from the drama up until this point, so when it does show up it's a genuinely funny surprise.

It's always amusing when characters clearly come up with plans and counter-plans, only to discover at the last minute that they'd failed to take into account some really obviously dumb information that would make a lot of sense to take into account considering these are pitched battles between police officers and gangsters that we keep witnessing.

But in all honesty, I'm overemphasizing. For the most part this episode is sad in ways that I can't describe without ruining their emotional impact. The weird part about this drama that helps it stick is that, even if every character is basically dumb or incompetent, the fact that it's a level playing field, and that any individual is just as likely to come out on top due to sheer dumb luck, gives it a feeling of authenticity. I may be used to capable, intelligent characters, but poorly qualified people get into adventures, too. And if we prick them, yeah, they bleed too.

"[HanCinema's Drama Review] "Who Are You - 2013" Episode 14"
by HanCinema is licensed under a Creative Commons Attribution-Share Alike 3.0 Unported License.