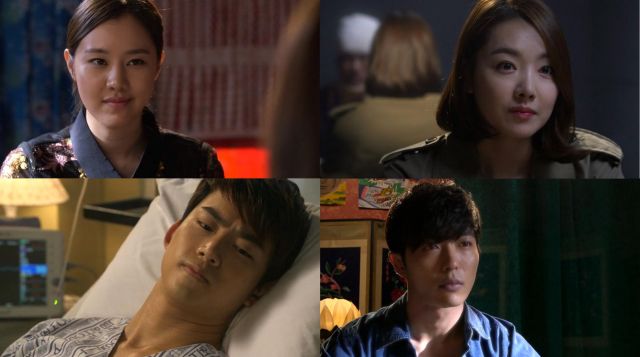 There's very little action this episode as, with Geon-Woo out of commission and thus unable to solve problems with gratuitous violence, Si-On has to resort to actual detective work to start bringing the criminal conspiracy to light. It's quite funny just how little effort she has to go to to do this, compared to every other bit of progress the investigation has made, which was accomplished with the assistance of severe mortal danger.

Less amusing are the hospital scenes, which are sad if only because of the context they're placed in. After the revelation of last episode's cliffhanger, there are any number of directions the narrative could have gone, and it picks one such direction. Perhaps not the most dynamic and impressive resolution to this particular storyline, but I have to admit that it works. There's something sad and cruel about it all- and yet it's all completely in line with how every other ghost in this drama has acted with Si-On.

Pretty much the entirity of the episode is focused on these two points, with other smaller events not really being particularly relevant to discussion. While I'd like to say I don't want to ruin the story by discussing it in-depth here, in all honesty nothing that happens is really that deep or complicated. It exists, and it provides the catharsis it intends to, and that's pretty much it. The same hints of "Who Are You - 2013"'s general charm regarding incompetency and a police force with a poorly defined job description are here, but they're not really in outrageous territory, so I really don't know.

The main appeal of this drama has been trying to discern the logic behind character actions, and now that the mysteries have pretty much been solved, there's little really left to do except for a climax and maybe a happy ending mop-up. The only thing left that the drama could really explain to us is why Si-On has the ability to see ghosts in the first place- although I don't know that this would be a particularly interesting subject of discussion, given that it hasn't really been relevant.

Come to think of it, I'm not even sure Si-On can see ghosts anymore, given the way this episode was resolved. And if she does, it's hard to imagine who she could see that could help her in whatever last ditch effort the gangsters put forward- wait, wait, I can think of one ghost that would be utterly fantastic and hilarious. All right, that's my optimistic hope now for the final episode. Don't let me down, "Who Are You - 2013"!

"[HanCinema's Drama Review] "Who Are You - 2013" Episode 15"
by HanCinema is licensed under a Creative Commons Attribution-Share Alike 3.0 Unported License.