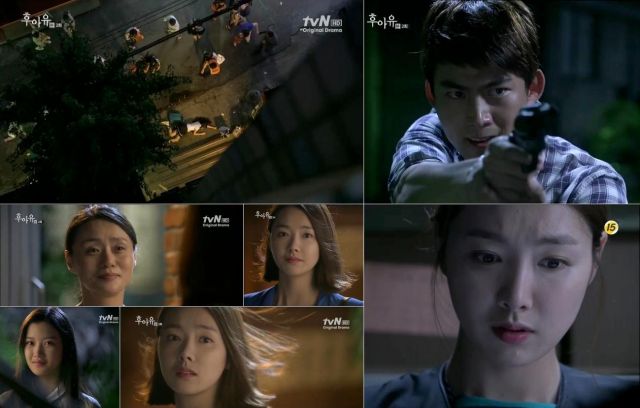 It turns out that the evil doctor is just as loony and cartoonish as the name "evil doctor" makes him sound. Literally the minute Si-On finds out his terrible crime, the stress of pretending to be an innocent person becomes too much for him and he immediately resorts to every ridiculous stock villain cliche he can think of in order to...actually, it's really not at all clear what he was planning to accomplish by attacking Si-On. There's a monologue reciting his villainous misdeeds. I guess sometimes you really just need to do an evil monologue.

Fortunately the villain has magical plot powers that keep Si-On from just beating him immediately. The evil doctor isn't physically intimidating at all. And given what we see in this episode, Si-On should easily be able to take him out in a fistfight. My only real complaint about this episode is that we never get to see Si-On physically beating up a doctor that looks maybe twenty years older than she is. He doesn't even look like he's in good shape- come on, just deck him!

I hope at some point Si-On does get to beat up someone because the poor woman is just so agitated by everything. Can't say I blame her. Actress So Yi-hyun seems to be struggling between showing the disgust her character is supposed to feel at confronting the evil doctor with the frustration she feels as a person for how awful this dialogue is. In between that, the ghosts, and her dimwitted love interest anyone would be frustrated.

Another part of this drama is clearly established that I can definitely get behind. Si-On and Geon-Woo are laughably unprofessional police officers. In this episode both of them act in such a way that really should have gotten them fired, or at least suspended for fragrantly breaking the law. But after a very trivial lecture they just go right back to the same (less blatant) unprofessional behavior they were engaging in before.

On general principle, I consider fiction that glamorizes workplace romances to be problematic. There's a reason why so many companies have policies forbidding it. But these two people? When they've already shown a willingness to break far more important rules, why would they balk at violating a relatively benign policy like that? That's what I like about this drama. As much as it's failing to present its lead characters in a sympathetic light, its failures are internally consistent.

"[HanCinema's Drama Review] "Who Are You - 2013" Episode 2"
by HanCinema is licensed under a Creative Commons Attribution-Share Alike 3.0 Unported License.