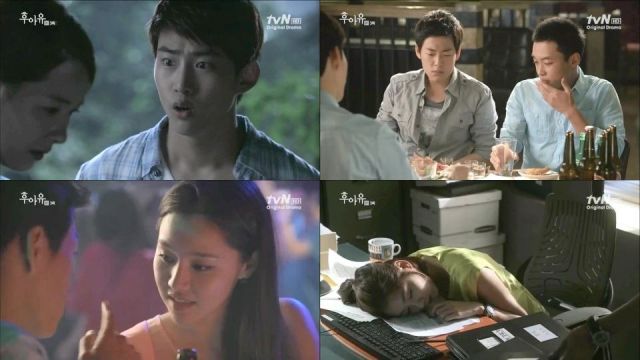 Si-On seems to have trouble making up her mind about the best way to get rid of the annoying ghosts. One minute she decides to just do whatever it is the ghost wants her to do, even if it makes no intuitive sense in the situation and makes her look like even crazier a person than usual. The next she tries to avoid or run away from the ghost, always forgetting that, as a ghost, Si-On can be followed basically anywhere. Sometimes she asks for help only to ignore it in a huff. Si-On seems to have forgotten that she can make the ghosts leave by taking her meds. Or maybe that was just the writer, I'm not really sure.

Ghost rules also take a perplexing turn in this episode. Apparently there's some sort of relation to how much of a ghost we can see compared to how many parts of the original corporeal body can be found? And no, that sentence doesn't make much more sense if put into context. The ghost seems only capable of helping Si-On in very piecemeal ways that advance the story at a slow pace. Why her powers have such arbitrary limitations is unclear. It's probably too much to hope for that next episode the ghost will make the villain feel chilly at a critical moment.

Geon-Woo's actions are about as inexplicable. He goes along with every crazy plan Si-On comes up this episode, then when it comes to a relatively minor bureaucratic dust-up at the office then all of a sudden he's willing to challenge rank in front of the subordinates. He picks battles over the weirdest stuff- by which I mean the most normal stuff, since the weird stuff is what he's going along with for no reason. In fact, Geon-Woo seems to have the ability to teleport just in time to see when Si-On is about to doing something strange.

We get more exposition about the two other subordinate officers at the Lost and Found center. It involves them going to a dance club. Why this scene was necessary I have no idea. I'm trying to imagine how a future episode could possibly build off of this and I have nothing. Personally, I'm hoping the dance club is haunted. There's absolutely no evidence to support that particular narrative direction but that hasn't stopped this drama before.

Right now it looks like the drama is in a holding pattern. Si-On is annoyed by ghosts into solving a mystery. Geon-Woo always decides on the course of action that is least professional at any given moment. Together, they fight crime. And I mean that literally. These characters aren't detectives- they just randomly waltz into dangerous situations with no plan in a way that encourages physical conflict. I look forward to their next terrible course of decision-making.

"[HanCinema's Drama Review] "Who Are You - 2013" Episode 3"
by HanCinema is licensed under a Creative Commons Attribution-Share Alike 3.0 Unported License.