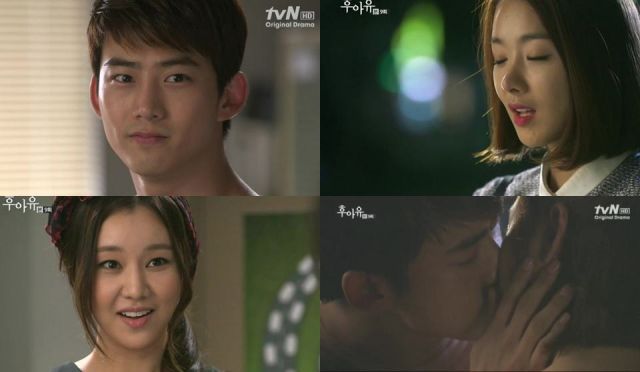 Characters who had previously taken very specific actions in regards to their love interests have apparently failed to consider what exactly step two of their plan was. Geon-Woo knew when he contrived this a-date-or-maybe-not situation that you were still going to have to go to work the next day. Apparently he really was so short-sighted that the best plan he could come up with was acting like a shy, idiot teenager.

I like how, in spite of that epic kiss, apparently Si-On and Geon-Woo still aren't in what we could reasonably call a romantic relationship. Si-On barely even registers that the event happened at all. Bad writing? Possibly- but I choose to interpret this as just another long-reaching impact of the unprofessional way she conducts the workplace. Why yes, she can totally kiss her subordinate and expect the emotion fallout to be his problem. Why shouldn't she? Her job has no apparent oversight or responsibilities, so who's going to stop her? Not to mention, he kissed her. Try explaining that to the human resources officer. Well played, woman who I would not want as my boss.

Incompetence in the workplace crops up other places, too, as we discover this specific branch of the police department has no apparent security. By which I mean, I'm not even sure they have locks on the doors, or guards who stay awake all night. It's a lucky thing this job is so unimportant. Except for the parts where Shi-On has to go on ghost-related adventures, although I have no idea what she writes this down as in her employment log.

There seem to be relatively few ghosts these days to pester Si-On. Even Hyeong-Joon seems to be avoiding her lately, preferring to instead communicate through Hee-Bin, the cute spirit medium. Apparently she hasn't gotten the memo that this is supposed to be a drama about gangsters, because she continues to act as if she's in a romantic comedy and that the ghosts exist mainly to enable her love life. It's too bad Si-On didn't think of that. Could have saved her a lot of trouble earlier on.

Oh, and the gangsters! Can't forget the gangsters! They're a real mob. By which I mean, hand them torches and pitchforks, and I could see them chasing monsters through the street. They've taken the organized out of organized crime, and instead utilize that adjective in attacking people in specific, easily memorized patterns. But hey, I can't complain. Any plot contrivance that ends up with Si-On smashing guys with a large wooden plank is a contrivance I can totally get behind.

"[HanCinema's Drama Review] "Who Are You - 2013" Episode 9"
by HanCinema is licensed under a Creative Commons Attribution-Share Alike 3.0 Unported License.