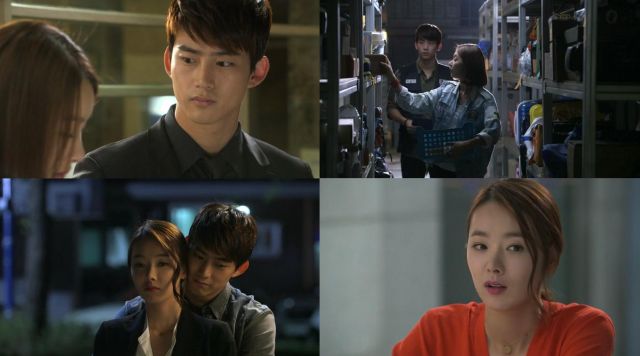 Nothing much actually happens this episode. That's honestly not an exaggeration. Even the drama itself seems to acknowledge that there isn't anything left for these characters to do, as the entire opening is just a replay of the final dramatic scene from the last episode, where Si-On makes peace with Hyeong-Joon's ghost (or more accurately, he makes peaces with her). From that point onward, it's just tying up loose ends.

Except there aren't really any loose ends to tie up. The gangsters are finished. Apparently all it really did take was someone taking the trouble to arrest some of them for the multiple crimes they've committed in broad sight of multiple people during the run of this drama. There wasn't even so much as an action sequence as far as I can tell. "Who Are You - 2013" began and progressed with bombastic incidents of tomfoolery- and ends with practically nothing.

One of the parts I enjoyed about this drama was that its mere presence was kind of like a jolt of coffee. In its most absurd moments, there was this very earnest, very engaging power behind the action that demanded my attention. By contrast, in this episode for many parts it was a struggle for me just to stay awake. I know the last episode is supposed to be calm compared to whatever came before it, but come on.

Given that this episode had fifty minutes to fill even though most of the interesting stuff had already been dealt with, I don't think it was really that bad. All the characters are in about the place I would expect them to be. No grand illusions of romantic narratives here- it's still very much just about doing date stuff, all within the context of a relatively mundane, ill-defined job. I do like that the character development, while fairly extreme insofar as Si-On relates to the ghosts, is fairly minor for everyone else. I mean, we've only been watching eight weeks of story. The lives and personalities of normal people don't change that much that fast, even when trauma is involved.

It's still nonetheless disappointing that there was no final antic or zinger to get across, something that would effectively encapsulate what watching this show has been like. There's this brief hint of interesting action right at the end, when spooky sound effects and camea angles start shifting around the lost-and-found department- but we leave off of that without even so much as an "and the adventures continues". Maybe it does and maybe it doesn't. But I guess now that the big ghost and the gangsters are all dealt with, it's probably not worth it for the camera to pay attention to these characters anyway.

"[HanCinema's Drama Review] "Who Are You - 2013" Final episode 16"
by HanCinema is licensed under a Creative Commons Attribution-Share Alike 3.0 Unported License.