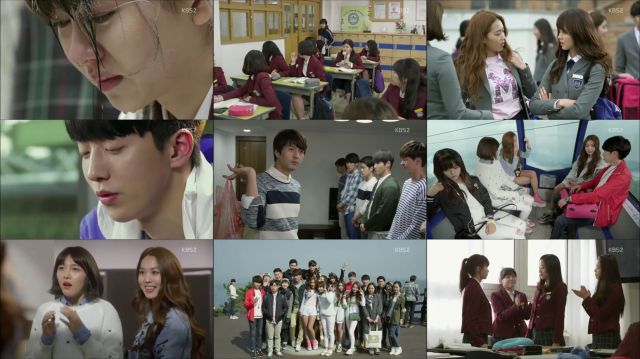 Eun-bi (played by Kim So-hyun) is a normal teenage girl who had the misfortune of being born into less than ideal circumstances. Eun-byeol (also played by Kim So-hyun) was also born less than ideal circumstances. But she had the luck to be adopted into a more well-to-do family. From the very start "Who Are You - School 2015" makes a point of offering up the same old trope about what might have been.

What makes the proceedings interesting is that, social circumstance notwithstanding, Eun-bi and Eun-byeol have very similar personalities. Neither one of them have any tolerance for cruel behavior. Yet whereas Eun-byeol mostly snaps at people indiscrimintately, Eun-bi is only ever able to muster the courage to do the right thing when other people are involved. And as is quickly made clear, just because Eun-bi is pretty and has an assertive personality doesn't make her any less of a target for bullying.

Of all the Korean media made lately to discuss the topic of bullying "Who Are You - School 2015" also manages to stand out for just addressing the situations in such terms of permanence. While we haven't gotten to the switcheroo part of the story yet, by the end it's clear that Eun-bi is going to go along with the facade for the simple reason that life has just gotten too unbearably miserable. Eun-byeol's problems, serious as they may seem, at least take actual physical form. Whereas Eun-bi's tormentors...

Well, it's just the irony of the modern day. One would think that in a world where CCTV is nigh-ubiquitous bullying would be harder rather than easier. To the contrary- teenage bullies, for all their ethical failings, are intelligent enough to realize that context and plausible deniability are the order of the day. It's something that's always made me cringe in Western productions about bullying- inevitably the heroes themselves end up resorting to bullying behavior because it's not the behavior that's the problem. It's whether or not the victim sufficiently deserves it.

I doubt we'll find any such platitudes in "Who Are You - School 2015". Mainly it's just that the writing has too much of an eerie ironic quality- at multiple points Eun-bi's very own moral arguments are thrown back in her face. The entire situation has been contrived such that Eun-bi is forced into an apparent situation of hypocrisy. The conflict has been pretty clearly established, the tone sufficiently dark without being overpowering, and no obvious resolution is in sight. All in all, that's a pretty promising start.

"[HanCinema's Drama Review] "Who Are You - School 2015" Episode 1"
by HanCinema is licensed under a Creative Commons Attribution-Share Alike 3.0 Unported License.