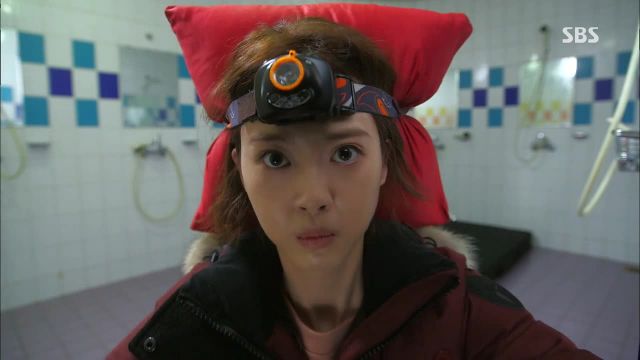 "You're Surrounded" is now focusing on the idea that the rookies and their leaders are growing into an extended family. Within any family there is love, jealousy, fighting, misunderstanding, and secrets. Brothers fight, parents feel pride. Now that the detectives are one family, they have to suffer through growing pains.

Ji Gook gets his time to deal with his issues of inferiority, rendering his tight relationship with Tae-il tense and awkward. It seems to come as a result of the secret sharing, which I'm guessing had something to do with Tae-il's medical background. Ji Gook is a humble country boy who doesn't possess Tae-il's looks, height, money, or intelligence, which makes him jealous and standoffish. The fractured brotherhood is a potent subject that is mirrored in the case-of-the-day: two real brothers argue over the cause of their father's sudden death.

Along with the growth of Ji Gook and Tae-il's characters, is Dae-goo's growth. He has grown the most of anyone since the creation of the team, save for perhaps Pan-seok. Both men look fondly upon their team now, Pan-seok as a father-figure and Dae-goo as a sibling. It is Soo-seon who gives them both that feeling of belonging to a family with her fussing over small things like small cuts and how much they have eaten. In return, they worry for her safety while living on the roof of the precinct in a tent. That worry creates ripples in the rest of the detective family - it makes jealousies rise and people more aware of their feelings. All-in-all, a very clever way to work on each character's issues simultaneously, keep the story moving and have the leading men grow up a little.

Dae-goo's identity didn't remain a secret as long as I thought it would. It was a smart move on the writer's part because the secret could be completely revealed to the team, or only be known to Pan-seok, creating interesting tensions. The secret has been slipping out along with Dae-goo's need for companionship. The closer he gets with his team, the more he starts to like Soo-seon, the more he lets down his guard. But it's been wonderful for his character who is growing leaps and bounds each episode. He couldn't sleep without drugs or television on falls asleep in Soo-seon's comforting presence. He couldn't be bothered to care about his job in episode 1, but is now setting aside opportune chances to gain insight into his mother's murder to be a detective and catch criminals - and he enjoys it. That joy in his work, that joy in Soo-seon's presence, that was missing from his life.

"You're Surrounded" continues to surprise and please me with its steadily growing quality of writing and character development. The humor is woven in quite nicely without being overpowering. The characters are relatable and struggle with relevant issues. The issues aren't subtly expressed, but that is part of the writing style. Next week finds the show at its halfway mark and hopefully will bring a few new and interesting things to the table.