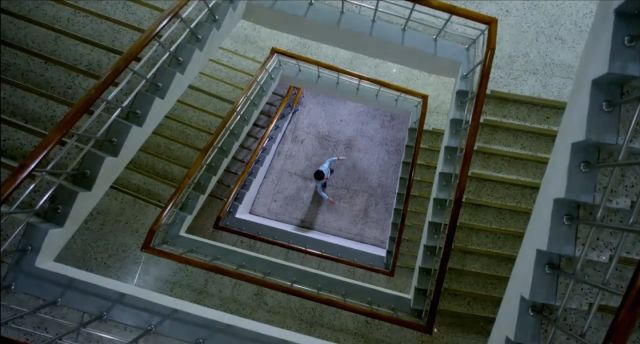 In the spotlight this week: Shin Su-won's "Pluto"...

The competitive culture Korean students are expected to thrive in is brutal; pressures that mark the ugly side of Korea's scholastic game of snakes and ladders. Students are expected to go above and beyond their personal passions and perform across a wide array of subjects and skills to become, or at least aim to be, polymaths and scholarly sages. It is not enough to hold a degree from a credited institution, one must climb the most prestigious ivory tower around while resisting the very real impulse to jump off somewhere along the way.

This culture of unrealistic and relentless competition was captured in Shin Su-won's 2013 film "Pluto", a thrilling portrayal of the dark consequences of such a pressure-cooker system. The film casts a critical eye on Korean education and sharpens its gaze upon the bottom-line victims-the students themselves. Specifically, the film takes us into a elite boarding school where we follow a group of top achievers and their cutthroat quests to be the best. But before we are introduced to any of these hopeful young minds, or even begin to romanticize about their final school years, the death of one of the top students hits hard and early.

Kim Joon (Lee David) is the new kid on the block at this elite institution, and the film opens its pessimistic tale with him being interrogated as a suspect for Yoo-Jin's death. Kim is studious and determined to get in the nation's most prestigious university (Seoul National University), a dream that many Koreans share but few are actually able to achieve. His involvement in Yoo-jin's murder is unclear, and the film proceeds to take us back to when Kim first arrived at the school and slowly adds weight and perspective to the curious mysterious circumstances that shadow Yoo-jin's passing.

This is how "Pluto" progresses as present moments and tensions are juxtapositioned with the recent past. This choice of narrative structure is effective and thrilling, and spectators are allowed to witness the boiling of the kettle one bubble at a time. The fire driving the boil is a combination of your typical high school pressures (humiliation, peer pressure, social hierarchies, etc.) and the extraordinary, and tragic, consequences of Korean culture around education and achievement. Suicide, depression, and anxiety are splatter across the screen in varying shades and thickness, around which these young minds melt and mould into the curious casts society has burdened them with.

"Pluto" is not only a culturally significant feature that reveals the hardships and morbid consequences of unrealistic educational pressures, but it is, in its own right, a beautifully composed event flecked with subtle pronunciations of the problem at hand. One such comes from the film's name itself, "Pluto": the lost little planet who was expelled from the cosmic order due to recent definitional disputes or, in classic mythology, the Greek God of the underworld; both understands are echoed throughout the film as themes that enrich the unfolding tale beyond mere narrative progression. The former planets inclusion also seems particularly apt for describing the larger system at play here, the greater puppet masters (i.e. Korean educational culture) and the young souls who are ask to dance to the sounds of that system.

This tale of strained cogs in a cruel and over-demanding clock is an important one, and I have yet to be exposed to a more telling and nuanced depiction of the Korea's current scholastic state of affairs. There are not real antagonists here, only victims of circumstance and a demanding culture of excellence and self-sacrifice. The 'world' in which these sad shadows dance is the real tragedy, it is the sadistic space in which these young minds are asked to survive in a cruel and Darwinian fashion.