★★★★ "I Love You, Jin-yeong!": A struggling writer gets romantically involved with a director who offers to make her dreams come true. (11/07)

★★★★★ "The Weight": A tragic telling of the life of a hunchbacked mortician and his transgendered stepsister. (11/07)

★★★★ "Passion Flower": A dying man hires a caregiver to help him, but soon their relationship flourishes beyond their expectations. (11/07)

★★★★ "Steel Cold Winter": A small-town outcast and big-city newbie find each other and form a fatalistic bound out in the country.  (11/07) 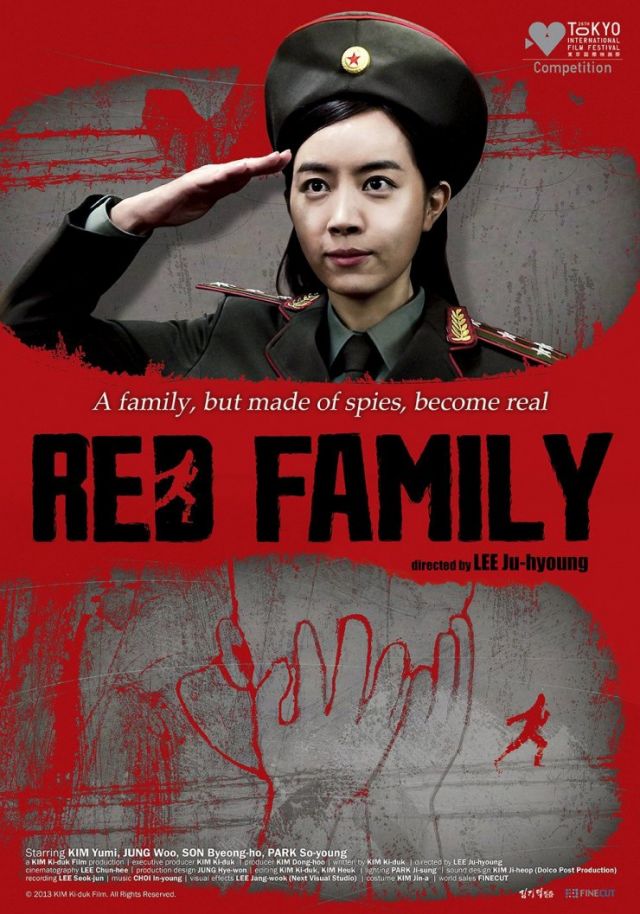 The Short and Sweet: A coming-of-culture drama about a family of North Korean spies misfiring undercover.

Straight from Kim Ki-duk's magic emporium comes Lee Ju-hyoung's debut "Red Family", a compelling and probing story that examines the spy paradox as it appears within the family unit. Normally spy movies involved just the single agent, the lone outsider-within upon whom all the pressures of their alien world fall. In "Red Family" that pressure is dispersed onto a family of four as Lee and Kim focus on the relationship dynamics of this false pillar of society. Expect a character-driven narrative and a formal aesthetic, less explosions, gun fights, and highly-stylised action than will be mostly likely found in another local film coming out this week: " Commitment". 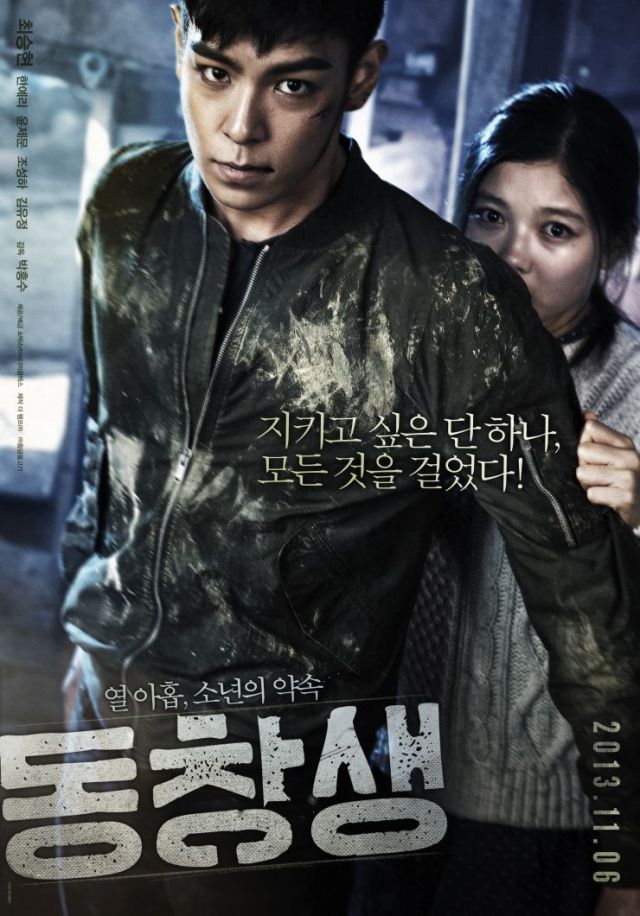 The Short and Sweet: The son of an ex-North Korean spy is torn between higher powers as he fights for those he loves.

In 2009 Big Bang's T.O.P (Choi Seung-hyun) starred in the war drama "71-Into the Fire" (3.3 million admissions) by John H. Lee, where he played one of the student soldiers that were forced to make a brave stand against the encroaching Northerners. In Park Hong-soo's debut Choi's character takes on a similar pressure situation during 'wartime', this time targeting third generation Koreans by situating that same 'sins of the father' tragedy into a modern setting. The result is Choi's character (Myeong-hoon) 'volunteering' – out of pressure to save his family, particular his sister Hye-in (Han Ye-ri) from a North Korean concentration camp – to undertake a deadly and dangerous mission into Seoul (via 'defection'). To mask his agenda he is enrolment in a local high school while he awaits his orders. Meanwhile the local authorities catch wind of his presence, and Myeong-hoon finds himself under pressure from all asides as he tries to protect those he loves. 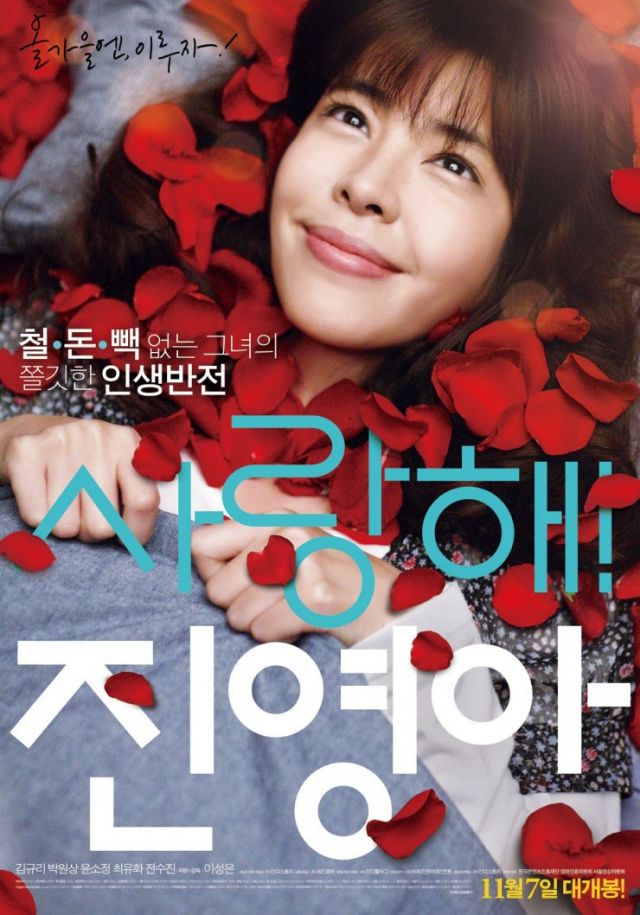 The Short and Sweet: A struggling writer gets romantically involved with a director who offers to make her dreams come true.

This cute little drama follows a thirty year-old woman who has her head in clouds where she dreams of her zombie novel. Jin Yeong (Kim Gyu-ri) is obsessed with her story but so far the outside hasn't responded. That's until she gets approached by Hwang Tae-il (Park Won-sang), a movie director interested in her opus as well as her heart. 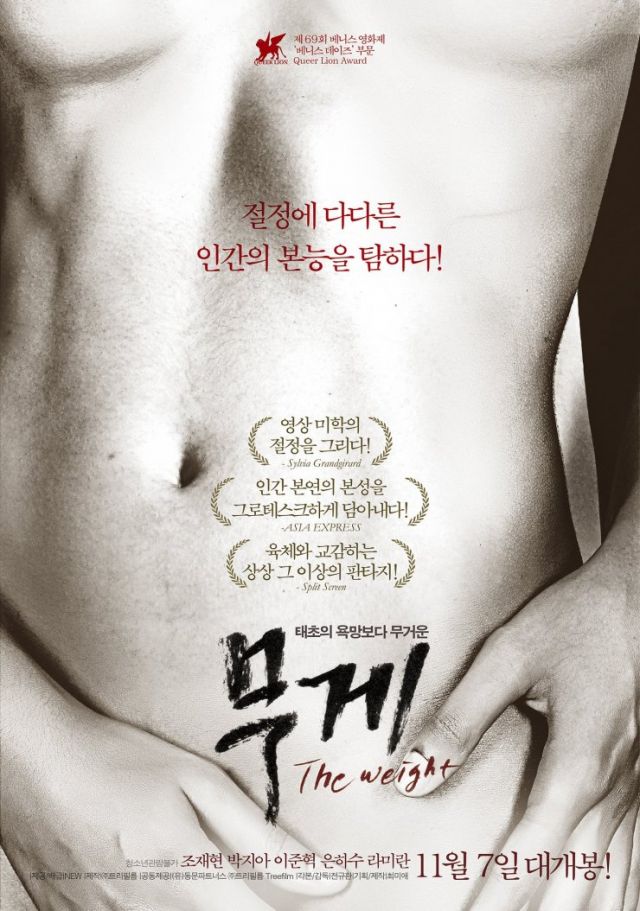 The Short and Sweet: A tragic telling of the life of a hunchbacked mortician and his transgendered stepsister.

"The Weight" made its world premiere at last year's Venice International Film Festival where is won the "Queer Lion" award for "best film with a homosexual and queer culture". This is director Jeon Kyu-hwan's fifth feature since his debut "Animal Town" (2009) and looks dripping with dreamy drama, fantastical moments, and surreal conflicts that happily flirt with the genre of magic-realism in a thought-provoking and meaningful way. 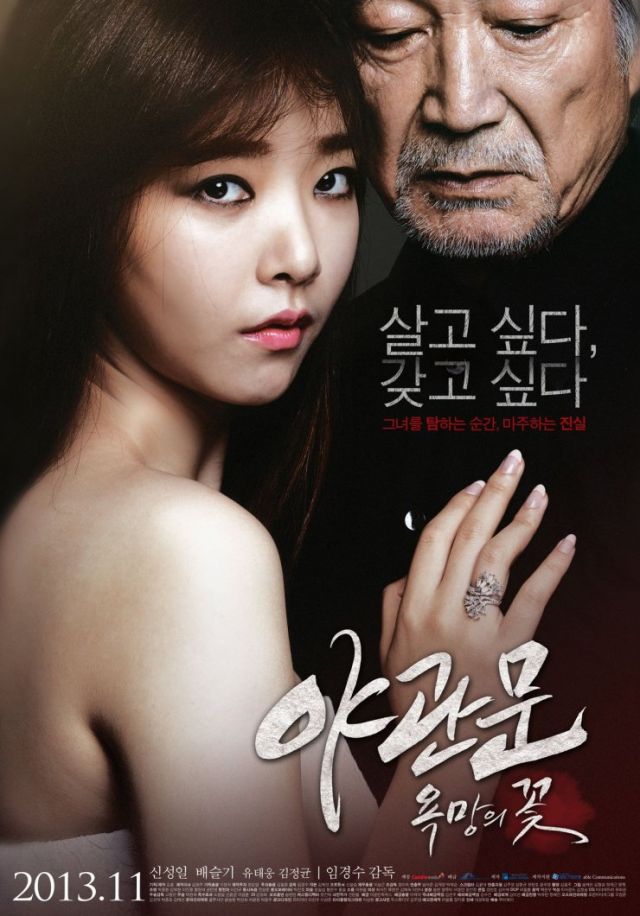 The Short and Sweet: A dying man hires a caregiver to help him, but soon their relationship flourishes beyond their expectations.

Gauging the age-appropriateness of relationship was a bit of theme in 2012 and with "Passion Flower", director Im Kyeong-soo's third feature, brings that back into the public's consciousness. The story tells of an older man (Kang-Shin Sung-il as Jong-seop) who has lost both his wife and son during his years, and also has been given 6 months to live due to cancer. Jong-seop hires Yeon-hwa (Bae Seul-gi) as a personal helper, but soon enough he finds himself attracted to her, feelings that are reinforced to tragic ends as another truth is discovered that affects their relationship. 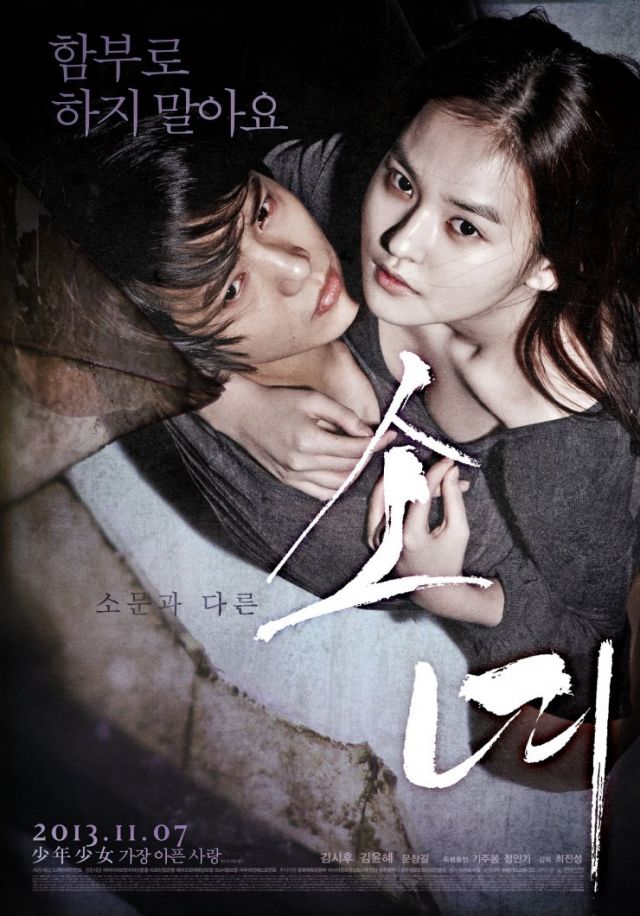 The Short and Sweet: A small-town outcast and big-city newbie find each other and form a fatalistic bound out in the country.

A fatal love story about collision between a city boy running from his past guilt and a country girl hiding secrets in our own town. This is director Choi's fourth time out in the chair, a creative talent who has also been credited with the editing and scripting duties on such film as "Camellia Project", "Dasepo Girl", and "Jam Docu KANGJUNG". "Steel Cold Winter" stars Kim Si-hoo, as the urban cool kid Yoon-soo, and Kim Yoon-ye as the daughter of town's pariah and keeper of secrets. There are a lot of interesting conflicts that emerge out this premise and, like many of this week's releases; the promise of delivering a satisfying experience is high. We will have to wait until next week though to see exactly what the Korean public made of this week's string of intriguing flicks.