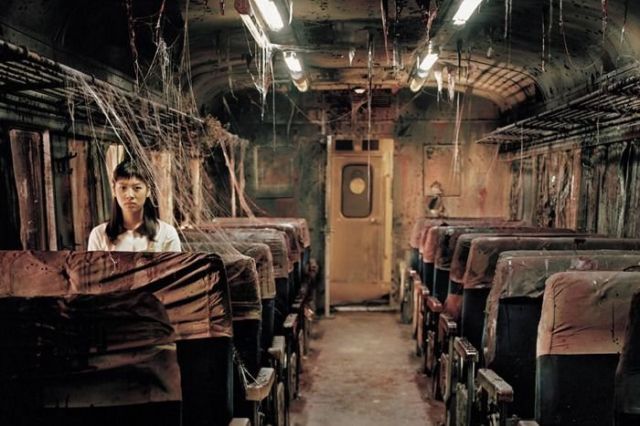 My introduction to Korean cinema was less than stellar. It wasn't "Old Boy", "Memories of Murder", or "The Host" (i.e. some or other respectable modern masterpiece), but the trope-driven train wreck "Red Eye". I recently stumbled across this overzealous zeitgeist again on Viki.com, and my nagging nostalgia turned against my better judgement and I fired it up.

I was surprised to find that director Kim Dong-bin had, prior to "Red Eye" (2005), directed two other feature films: the drama "Mom Has a New Boyfriend" in 1995, and the horror flick "The Ring Virus" (1999). "The Ring Virus" explains the various ghastly horror tropes sprinkled throughout my first Korean encounter, because Kim's third feature, Kōji Suzuki 's "Ring" (1998), and the American remake "The Ring" (2002) are all cultured adaptations of Koji Suzuki's original 1991 novel: "Ring".

Kim's filmography is suspiciously spacey, and his latest effort, "Two Moons" (2012)--another horror--struggled at the box office and claimed just 427K. In all likelihood Kim Dong-bin's "Red Eye" should have deterred me from tumbling down Korea's cine-hole, but it didn't. Amidst the placid plot points and inert horror, there was a compositional something that kept me riding this infected ghost ride.

Exactly 15 years after a train wreck left 250 passengers dead, Mi-seon (Jang Shin-young), the conductor's daughter whose father was on duty that fateful day, decides to book her first work shift aboard the train's last trip from Seoul to Yeosu. Min-sun is a new train attendant and it quickly becomes apparent that her vocation has more to do with the train's past than her future. She walks the isles of this late night locamotive trying to sell her quoted of wares to the scarce and scattered passengers. She's horrible at her job, but her kind heart and desire to be close to her father keeps her aboard and mobile.

This drearily ominous train then starts to become self-aware, and seemingly appreciates the significance of the course in question, and curiously crosses over. It/she terrifies a few choice characters, reveals herself to our haunted heroine, and eventually threatens to consume the lives of all those on board. Again, the film's plot and progression is not its most flattering, but along this runaway leitmotif came a few pleasant beats that are spaced just enough apart to make the film's 97 minutes possibly pleasing.

My next two entries were Chung Yoon-chul's successful drama "Marathon" (2005), and another train-inspired flick, this time of the action variety, "Tube" (2003); both of which were, once again, not of my choosing, but having been blinded by "Red Eye" (and then these two melodramatic and manic flicks) I still managed to move on and start curating my own path through modern Korean cinema.