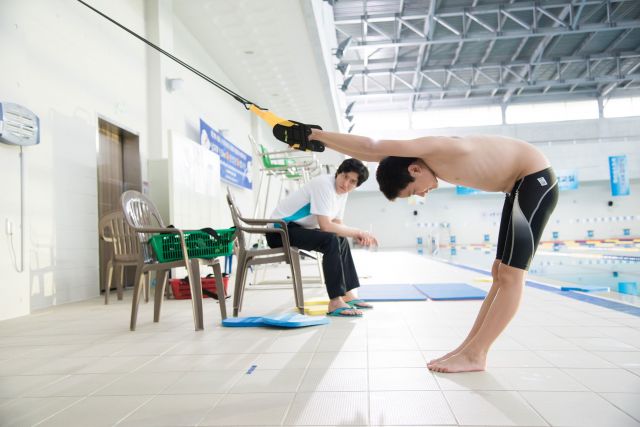 Teenage swimmer Gwang-soo (played by Jung Ga-ram) lives in a black-and-white world where talent is all that matters when it comes to getting a spot at the 1998 Asian Games in Bangkok. He is not knocked out of these illusions by any singular tragedy. Rather, people just get sick of dealing with Gwang-soo's nonsense. Flash-forward to the present day, where the adult Gwang-soo (played by Park Hae-joon) is living a pointless dead-end life. The factor which ultimately persuades Gwang-soo to take on young charge Joon-ho (played by Yoo Jae-sang) as a protégé? Metaphorical self-flaggelation.

In a sense, isn't that what all competitive sports boil down to? Beating yourself up for no reason in the name of some arbitrary goal? While Gwang-soo is at times much more brutal to Joon-ho than seems necessary, his physical lacerations are only slightly more injurious than the verbal ones wherein Gwang-soo openly belittles Joon-ho's very concept of self-worth. What's the point of getting involved in a hobby if you're not going to take that passion all the way?

Oddly enough "4th Place" never offers much of a convincing rejoinder to that question. Worry not. No movie made in this day and age is going to have an overall moral thrust as barbaric and horrifying as "it is good to torture people until they're motivated to succeed". But I did find it odd that while Gwang-soo's behavior is obviously not presented as good, it does at the same time inspire Joon-ho to find his own path in life and do something more fulfilling than play computer games in his spare time.

Gwang-soo doesn't even really get a character arc, come to think of it. After a certain point he just wanders off from the main plot and the final takeaway is that Gwang-soo has returned to the pathetic life he was living before meeting Joon-ho. Well, kind of. Another one of the elements that muddles "4th Place" in the interpretative sense is that competitive swimming is consistently treated as the gold standard for swimmers even though swimming does in fact have therapeutic applications which do not require massive adrenaline pumping.

Director Jeong Ji-woo infuses "4th Place" with an energy that's a bit at odds with the tone. The swimming scenes are intense, regardless of whether the theme is maximum exertion, tactical submersion, or simply exploring the world of the deep empty yet not quite endless blue. The underwater world is, compared to the one on land, incredibly intoxicating, and the same can be said for Joon-ho's own life, which never really suffers from that horrific a tragedy.

In terms of structure "4th Place" is an after-school special cleverly disguised as an independent film. That in itself is a pretty impressive achievement, given the lengths so many artsy films go to to avoid making any kind of actual moral statement. Yet for all the cinematographic beauty and raw performances, I finished watching "4th Place" unsure what the overall takeaway was supposed to be aside from "beating children is bad" and "don't be too competitive". Still, while a more proactive ethical message would have been nice, "4th Place" is nonetheless a decent enough film.