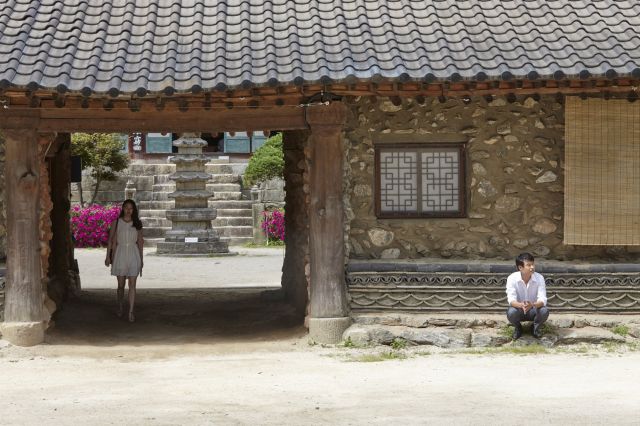 Gang-jae (played by Park Hyuk-kwon) is trapped in the closet. That's not a metaphor for his being gay, I mean he's literally trapped in the closet and it's quite some time before "A Break Alone" gets around to explaining the context for this initial dark, incomprehensible scene. That context though, soon proves to be generally depressing. Gang-jae is one of those married men who, for no particularly good reason, becomes obsessed with a nearby sexually attractive woman.

More broadly, of course, Gang-jae is an archetype- the man who makes bad decisions out of a misguided desire to escape boredom. Closet incident notwithstanding Gang-jae's failures are not terribly explosive. "A Break Alone" even manages to make a trip to Jeju Island look surprisingly mundane, because it's not the actual island Gang-jae cares about, but rather the fantasy of being an attractive person.

This is among the more interesting elements in "A Break Alone"- that attractiveness is a state of mind. Let's say, for the sake of argument, that in spite of being a generally unremarkable schlub you actually manage to have sex with a hot yoga teacher. Does that singular experience manage to magically turn you into an attractive person? Of course not. No matter how many people you have sex with or how attractive they are, you are still you, pathetic flaws and all.

That central belaboured point is what "A Break Alone" keeps coming back to. And for what it's worth, the film definitely has plenty of moments of effective dark humor. Gang-jae is only somewhat awkward. Aside from the whole closet incident, his generally unimaginative personality is oddly relatable. The more we see of Gang-jae's personal and professional life, the clearer it is that his "successes" are mostly a combination of random impulse and good timing than any obviously film-worthy quality.

The lack of any kind of real epic scope or pretension is the main downfall of "A Break Alone". It's a story about people who are largely incapable of expressing useful emotions. It's not that the acting is bad- an especially powerful scene involves tears in the car, in response to a fairly bog standard question that people in a relationship face on a regular basis. It's a question that pretty much everyone asks because romantic love is an inherently abstract unsustainable concept, yet somehow we have defined that as "true" love.

On any kind of analytical level this material is pretty fantastically bleak. Even when writer/director Cho Jae-hyun is able to pull off a well-deserved laugh the subtext at the back of your mind is likely to be "oh no do I ever do this I hope not". Really, "A Break Alone" is kind of an anti-date movie, in that it's such an uncomfortable examination of personal selfishness and character flaws that, well, in the end the whole "trapped in the closet" bit is a startlingly effective metaphor for why pining after shallow love affairs is a really, really bad idea.