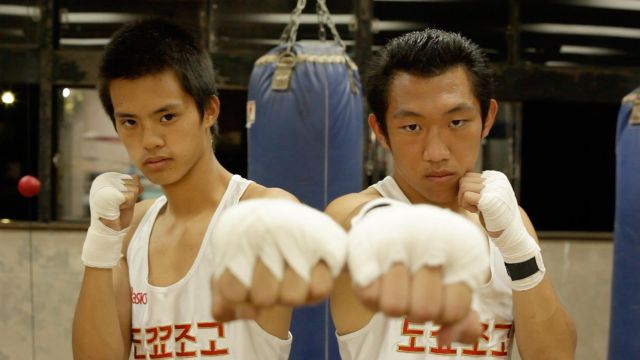 As "A Crybaby Boxing Club" opens up, we first get some important context for what it's like to be a long-term Korean resident in Japan. A significant portion of the Japanese population hates you, to the point they have marches demanding that you leave. In all fairness, they do bring up an interesting point. Why exactly would a Korean person, who fully identifies with the Korean culture, willingly choose to live in Japan some several decades after their ancestors migrated there? The answer is a simple political one. There's no such thing as Korea. There's North Korea and South Korea, but neither are the "real" Korea.

Now, if you ask the student boxers profiled in this documentary, they will eventually admit that if they had to choose one legitimate government, it would be North Korea. For all its flaws North Korea is indisputably run by Koreans, and does not play permanent host to a foreign occupying army. But I digress. While the political element is impossible to ignore, first and foremost, "A Crybaby Boxing Club" is a documentary about the student boxers in Tokyo Joseon High School.

They're actually pretty good at boxing, although you wouldn't know that from the way director Lee Il-ha edits their fights. But that's because he's being accurate to their perspective. To a high school student who dreams of being the greatest boxer in Japan, second place isn't good enough. These kids are insanely tough on themselves, even when we see from rival interviews that the boxers from more traditional Japanese high schools look at these Koreans and think these are some of the toughest, meanest, intimidating opponents they've ever seen,

While the Tokyo Joseon High School Boxing Club might just be, on one end, a simple boxing club, the nationalistic element adds a determination to the attitude of these students that's hard to match. Because they are aware of the political questions. They know that, strictly speaking, the fact that they're allowed to have a nationalistic high school at all is a concession on the part of the Japanese government. So these ethnic Koreans have to fight all the harder to prove that they deserve this place.

"A Crybaby Boxing Club" only profiles this one specific element of the Korean community in Japan, and we frequently see glimpses of home life around the edges. For all their patriotism regarding the real (if politically nonexistent) Korea, these students are also equally at home in Japanese culture. Some of them even have Japanese parents. But that doesn't really matter. High school sports are serious, and be it for self, nation, or family, these kids give it their all.

Aside from the politics there aren't really weighty elements at play in "A Crybaby Boxing Club". The documentary is just a look at another world. In the last year two other documentaries have examined the odd alien Korean experience- "One for All, All for One" and "Strangers on the Field". But of the three, I like "A Crybaby Boxing Club" the best because director Lee Il-ha really captures the contrast and mutual support offered by the identities of sportsman and expat patriot- all in the confines of the high school experience which itself is pretty easy to relate to.

"A Crybaby Boxing Club" is directed by Lee Il-ha