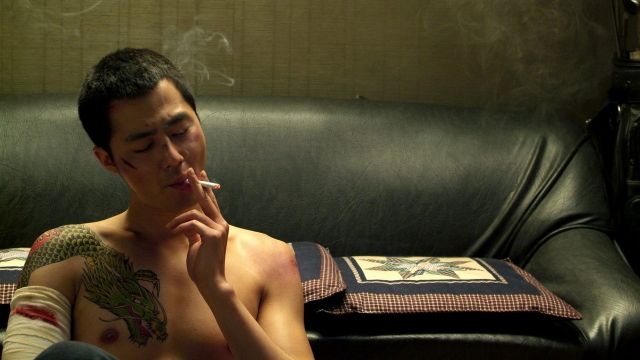 In the spotlight this week: Yoo Ha's "A Dirty Carnival"…

Poet qua filmmaker Yoo Ha has a gritty affinity for street-side struggles and tough times. "Gangnam Blues" (due out early 2015) will mark Yoo Ha's third such film after "Once Upon A Time In Highschool" (2004) and the iconic "A Dirty Carnival" (2006). There are, of course, broader signatures threaded throughout Yoo's increasingly complex filmography (which would then include "A Frozen Flower", "Howling", and "Marriage Is a Crazy Thing"), but with this latest a timely triad is revealed: an atypical epic that follows hamartia-ridden heroes imagined in various tough times as they gamble morality for mobility; peace for power and then (with any luck and interest) back again.

"Gangnam Blues" takes us to 1970s Seoul and stakes outs two friend's struggle to survive (or thrive; any medium seems poetically moot with Ha) in what is to become one of the most iconic, stylish, and affluent hotspots in the country. Political corruption is at its peak, and with industry and individuals eyeing the plump Gangnum area, power players of ill ilk are staking their claim to both men and meterage in the pursuit of power and profit. It looks and sounds like another delicious noir chipped with tragedy, and a fitting follow up to the brilliance found in his third feature.

In "A Dirty Carnival" our hero is an up-and-coming gangster (Jo In-sung as Kim Byeong-doo) whose personal life comes violently (and cinematically) into contact with his 'professional' pursuits; but his thuggery is simply the dirty means that nourishes his otherwise just dreams for those close to him, a way to secure resources, to prevent personal pain, and to lay the economic foundations for his, Tantalus-inspired, pursuit of happiness. And therein lies the seduction and potential for greed: the allure of an ever-better life (excessively realised: a 'life-long' debt of thanks here, fifty apartment units there, and beyond!) in a consistently disappointing and sinful world.

Rise. It's this promise of rebirth or regeneration that Yoo toys with and asks: Can a broken man climb a broken ladder? Is there virtue in malicious means aimed at happy ends? What good is there in a consequentialist ethic when the world is rancid and corrupt? Byeong-doo's mother's health is on the line, his siblings need support and guidance (the film opens with Byeong-doo beating his younger brother for hooliganism), a close friend needs help researching his film (more on that in a moment), and soon an innocent femme will capture his heart; all happening around the urgent underworld projects this mobile mobster has to bloodily secure and defend.

Byeong-doo has to make a move, make himself known to his 'sponsor' (a bankster with benefits who assigns 'problems' that need fixing) so that he can make a serious score and cash out. After hearing his boss complain about a powerful and persistent prosecutor that's on his back, this desperate young man makes the only choice he thinks he has left. Promises are made as the game sweetens and intra-organisational tensions swell, but as Yo's investment fund fattens so do the stakes, and the flaws of both our hero and the world get exposed and salted for our entertainment.

Running parallel to Byeong-doo's ascent is his relationship with Min-ho (Namgoong Min), a peer, a friend, and an aspiring directing doing research for his debut feature, which is, of course, a 'real' gangster flick. Min-ho resembles something out of a Hong Sang-soo's dreary dreamscape: he's socially awkward, melancholic, determined and somewhat sly and shifty. Their relationship seems innocuous to start, but Yoo slowly complicates matters and their friendship gets twisted (much like I imagine we'll see in "Gangnam Blues").

This 'outside' complication is, of course, not new to the Korean gangster film, but what makes Yoo's trope terribly successful was the self-reflexive subtext it spoke to (again, very Hong-like). What was first a quirky hinge became almost the very point, and so complemented the film's cyclic agenda and provocatively blurred the boundary between art and life.

Complementing all this character-driven drama is a number of fight scenes that really impressed. The gang scraps are vicious and relentless, and often involved hoards of baseball players and sushi chefs clubbing and stabbing each other in a swarm of well-choreographed standoffs. It's chaotic, and at times (not surprisingly or to discredit) unrealistic (Q: How many baseball bat blows does it take to end a gangster? A: All of them.), but Yoo was able to include such iconic clashes with a self-reflexive flare that honoured the art of violence, and then the violence in art.

The film lies somewhere between a hardboiled neo-noir and a gloomy coming-of-age drama, and is an important event in K-cinema history. It's not without its flaws (e.g. some uninspiring cutting and rhythm issues, the odd off-key music choice that dampened, and marginal secondary stereotypicals to nitpick at too), but "A Dirty Carnival" is ageing well, and remains one of Korea's most satisfying, sleek, and indeed poetic depictions of gangland tragedy.