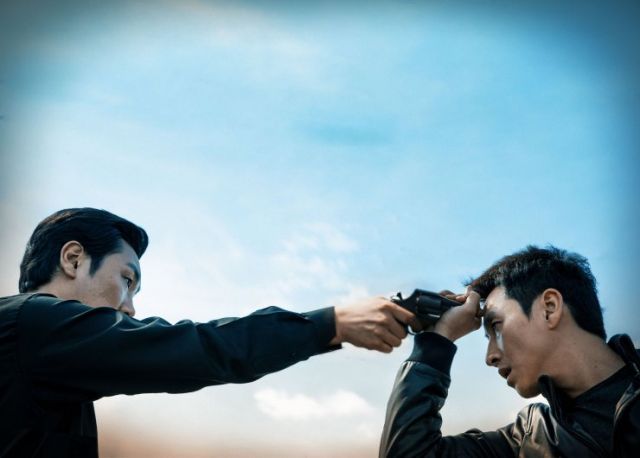 In the spotlight this week: Kim Seong-hun's "A Hard Day"…

"A Hard Day" had a tough, but rewarding, time at the local box office. After a positive premiere at Cannes (where it screened as part of the independent "Directors' Fortnight" section), this intense and dogged thriller clung onto its top ten ticket for an impressive eight weeks; a solid stint that required battling million-dollar titans like "X-Men: Days of Future Past" (4.3M), "Edge of Tomorrow" (4.6M), "Transformers: Age of Extinction" (5.2M), as well a local dagger in Jo Beom-goo's "The Divine Move" (3.5M)-all of which can claim to be among the year's highest-grossing hits.

Like the film's hero (Geon-soo inspired by Lee Sun-kyun, a familiar and brilliantly awkward energy often found fumbling in the works of Hong Sang-soo), the film fought hard against these massively successful spectacles (curious Cruise, divided mutants, giant robots; a tough draw indeed), but stuck through it to enjoy the fruits of its labour. The week following its ejection from the top ten, "KUNDO : Age of the Rampant" (4.7M) would come to lead the fray, while "The Admiral: Roaring Currents" (17.6M; fated to become the highest grossing Korean film ever by slaying "The Host") was quietly preparing to rewrite history.

All things considered, "A Hard Day" played it smart, strategic, and once the waters settle I think history will look kindly on this exhilarating action outing. So despite (or perhaps 'in spite' given the story to come) all these magnificently timed hurdles, "A Hard Day", Kim's second directorial credit, still claimed ownership of a little over 3.4M stubs. Honest pay, for an honest day? Perhaps for its battle at the box office, but the film itself is conscientious of its muddy moral fibre, and its highly-strung journey is meticulously macabre and pleasing perverse, if not shocking and nightmarish.

Kim cruelly has us follow a dirty and irresponsible homicide detective who stumbles, fumbles, fights and forces his way through a series of horrifically unfortunate events. His callous character is immediately made tragically clear: our mourning lawman (innocent enough cover, right?) is hastily driving to his office away from his mother's late-night wake (smelling of alcohol, naturally) in order to help hide the evidence of his teams' corruption (stacks of cash locked away in his draw and detailed ledgers documenting the dirt that's about to be exposed); he's on the phone to his colleagues, and then briefly (and now here's the tragedy planted) onto his son who asks daddy to bring chocolate cake when(ever) he comes home. And since he's driving like buddha caught with his pants down, he hits something.

Someone, rather, dead for sure though (cake?), and suddenly Geon-soo's world pivots on pins, and for the next twenty-four hours (a narrative/temporal feature that was thankfully not signposted via any on-screen graphics, or another tacky time-keeping technique) this deadman (but never deadpan) tries to untangle himself from the noose he knitted and kneaded. While rushing around to conceal and curtail his dastardly deeds (all while being "a very good son", said the undertaker on multiple occasions) Geon-soo's twisting tale manages to convincingly weave a dry and apathetic irony into its humour (which is of the regular K-quality, but here I found its inclusion uncanny and crafty, as opposed to the usual overzealous zeitgeist so often sighted and sourced).

Visually the film also stands out, and besides framing the adrenaline the film's demon-driven heart demanded, there where many compositions that warrant credit for successfully walking the like between quirky and quality. And it must also be noted that Cho Jin-woong played the perfect foil to Lee Sun-kyun's diversifying deliverance of a Hong-seeded evil; his character was solid, stolid and steadfast, a tenaciously Terminator-like figure who works alone because he always gets the job done. A truly terrifying quality of a corrupt bureaucrat qua shadowy puppet master.

"A Hard Day" may be morally moot, playfully outrageous at times, and perhaps even teases our fragile suspension of disbelief a little too much. But there's real quality here, and if permitted this twisted thriller will relish your time with pleasure.