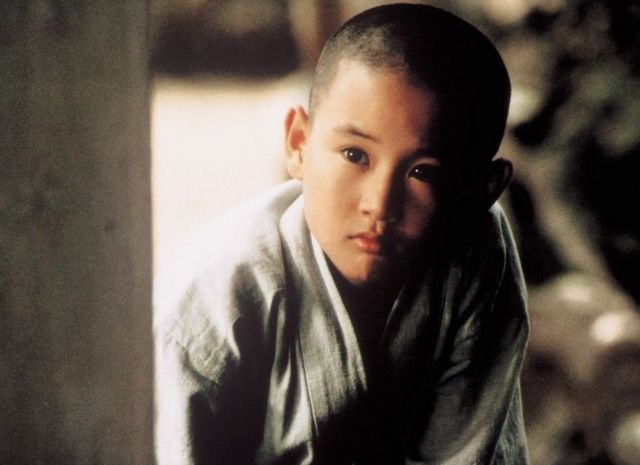 This movie depicts the dark side of Buddhism. I don't mean anything so cliched as monks driven mad by spiritual rights, jumping headfirst into the most grotesque hedony imaginable. "A Little Monk" goes into much more ambiguous territory, by giving us characters who don't actually seem to like Buddhism all that much, and yet they appear to have been forced into the faith by circumstance and don't really have any way of getting out.

The elderly master of the temple (played by Oh Yeong-soo) isn't really much help either. The man lacks any sense of charm and has difficulty dealing with the general incompetence of his chargers in regards to spiritual matters. The alarming part of this being that the main character of the movie is just a child. A child who, for a lifetime of spiritual training, is nonetheless fairly ignorant of the Buddhist precepts. The little monk clearly has desires attached to the physical world which can't be erased by his ineffective spiritual training.

Would a more competent temple master have made life easier for his two charges? It's difficult to say. I mean that literally- although there's plenty of dialogue where the man relates the essential principles of Buddhism, without a greater spiritual context most of his statements are meaningless and he just comes off as cruel. There's this constant sense that there's just some essential missing element that the younger monks are lacking. And that this isn't something that can be trained out of them. They have to experience life at its worst, and this sense of worldly pain isn't something that can be taught.

I was often reminded of "Spring, Summer, Fall, Winter... And Spring", another film from around the same time that also dealt with Buddhist precepts. That film, in the usual Kim Ki-duk style, tells most of the story in silence. Characters learn that their actions have consequences, and this is the sense of pause that makes it possible for them to have a fulfilling spiritual life.

By contrast, director Joo Kyeong-joong fills "A Little Monk" with moments that seem to have a great deal of spiritual significance, and are often explicitly stated as such, and yet we never get anything out of it. Certainly, the cinematography is good enough that it's easy to see the subtle beauty of the nearby landscapes. And yet, it's just, well, lacking in spirit is the best way to put it. There's no sense of appreciation for the beauty of life. And so it is that the movie also fails to explain why suffering is bad and destructive.

"A Little Monk" is a failure, but it's a very deliberate failure. The inability of the characters to understand why Buddhism isn't solving their problems is the entire conflict. This sense of helpless failure remains right until the end, where it seems like the dream has finally come true. It's only the sinking realization afterwords which establishes that ultimately the temple master was right about everything all along. His inability as a teacher does not negate the essential principles of Buddhism and make magical solutions possible. So it is from that context that we go forth, without direction, into the storm.