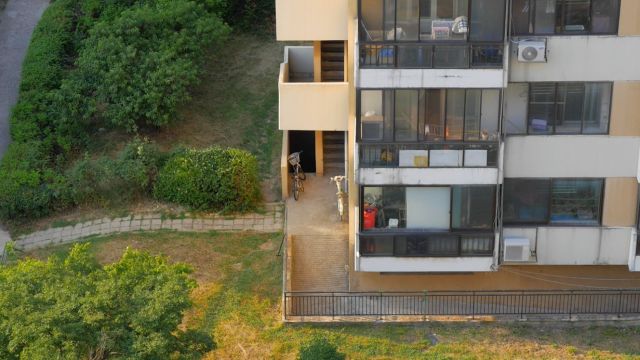 On the southeastern edge of Seoul, real-estate speculation spans out from the Gangnam district and slowly threatens to encompass all the region with the same hideous conformity of modern style apartment buildings. While "A Long Farewell" deals with one particular neighborhood affected by these market forces, the embellishment is mine. Director Raya has actually made a very abstract documentary- the kind you might expect to find at an art museum played on permanent loop.

One obvious influence in that regard is the complete absence of faces. "A Long Farewell" consists entirely of extended shots of various apartments. The only living beings we see in this apartment are a couple of cats in one. Wedding photos and family photos in others give a general idea of what the people who live in these abodes look like. Or at least, used to look like. All the narratives we're treated to are long and sprawling as the interviewees try to condense a lifetime in their apartments down to a few simple stories.

To a person with a short attention span these rather mundane anecdotes may come off as a tad dull. If I'm being completely honest in my takeaways from this documentary, it's that those two cats were really cute, and I rather liked the unsettling monologue where one guy compares his old apartment to the urban landscape that's replacing it. If you've never been to South Korea, there are giant apartment buildings everywhere, all of which look almost exactly the same. The feeling is vaguely dystopian and that particular monologue communicates that idea very well.

But once again, thinking about this story in archiectural and political terms is very much my own personal projection. Director Raya, just as a matter of course, is chiefly interested in what a lifetime spent in old apartments means. Little details are frequently evoked- like the old-fashioned emergency light that's never been replaced because, well, it's an old building. The landlord doesn't want to go through the trouble.

In each apartment that's visited we get the same little stories about minor, nearly imperceptible parts of the interior design that have really stuck with the inhabitants over time. Sometimes there are old family stories related to these features. Other times the affectation is merely aesthetic. You probably have your own thoughts about the place where you live, those minor aspects that warrant a moment of occasional bored wonder once in awhile.

That might have been why "A Long Farewell" feels just a tad thick to me. Modest seventy minute runtime notwithstanding, the documentary feels like it drags on forever. Liking this movie is a matter of taste- do you savor the fragrance of nostalgia in the face of oblivion, as with or without you, it feels like the world is moving forward? Then "A Long Farewell" is for you. There's also plenty of anthropological value here, in that the documentary has lots of good anthropological information about how South Korean people lived in the not-so-distant past.

"A Long Farewell" is directed by Raya.