[HanCinema's Film Review] "A Millionaire on the Run": There's a lesson in here somewhere... 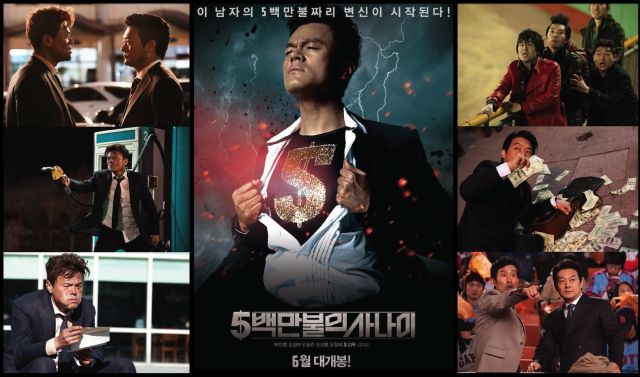 Choi Yeong-in (Park Jin-young) emerges battered and bruised from an unlikely robbery gone horribly wrong. After being charged with delivering a ridiculous sum of cold hard cash, $5 Million to be precise, to complete a dubious business deal, Choi discovers that his partner may not have in fact had his best interests at heart. With bags full of currency and two rival gangsters interested in his whereabouts, Choi hits the road and keeps low as he tries to formulate a plan to clear his name.

"A Millionaire on the Run" is director Kim Ik-ro's first feature after having been invovled in the production of such films as "My Girlfriend is an Agent" (2009), "Doll Master" (2004) and "Singles" (2003). Kim was working from Cheon Seong-il's scripting efforts that contained a questionable amount of already saturated Korean comedy motifs and themes. Corporate corruption and bribery, incompetent and goofy gangsters, and a soft-core moral message are but a few of the elements you can expect to find within this hyperbolic and bloated Korean comedy.

After the surprising suicide (sadly another recurrent narrative element in both K-cinema and Korean culture itself) of his best friend/colleague, Choi finds his moral compass struggling to find True North as he dreams of an authentic life. His hands have been soiled however, due his part in countless cases of bribery and splashing around in corporate slush funds. Buy a line has to draw somewhere and when the truth about his friends death starts trickling in Choi becomes determine to honour his memory and his own future by trying to clear his name and reassert order in this dishonourable abyss he has wallowed in for too long.

Choi's tale is paralleled with that of a young deviant named Mi-ri (Min Hyo-rin), a con artist of sorts who is more than willing to tag along with Choi after she sees the wads of dollars his so dispassionately possesses. Initially she tries benefit as much as can from the rich stranger, but she to has gang of goofy thugs tracking her down after her last con. Once united, Choi and Mi-ri make for a rather strange duet, not quote lovers and not yet friends, the two keep on the move together while trying to plot their next move.

"A Millionaire on the Run" will prove familiar to those who have dabbled in Korean comedy before. Slapdash jokes and goofball antics are a plenty, with a few culturally specific lines popping up here and there (both groups of pursuers, as well as the police, keep thinking Choi is an immigrant for one). The gangsters are their typical clumsy and disorganised selves, while impotent and powerless cops float in the background, only to appear conveniently whenever you've forgotten about them. The businessmen are suited up and green with gluttony, one-dimensional creatures whose only concern is self-preservation and, of course, money.

The film's light-heartedness is mirrored in its stock-standard cinematography and cheesy musical accents, making it very hard to differentiate this comedic entry from an industry that is flooded with them. With such a simple plot you would've thought that the film would get to the action fairly quickly, but it dwells aimlessly in ACT I for sometime, setting up a seriousness that only barely manages to add any significance to the films slow draw to its wildly convenient climax. These, along with a few other cookie-cutter scripting efforts, led the film away astray from being anything other than a failure (the film attracted a mere 193,124 admissions at Korean cinemas).

By far the film's biggest flaw was not it what it did wrong explicitly, but rather where it missed a chance to be unique and perhaps little more charming. The relationship between Choi and Mi-ri had potential to be the film's saving grace, but since it was neither a romantic pairing, nor one riddled in conflict, the duo seemed to exist in isolation despite their coming together for a seemingly common goal. There was an effort to instil meaning here, but a quick road-trip across the country on a motorbike does not automatically translate into a relationship we should care about. Maybe the stakes weren't high enough, or their age difference (14 years in fact) didn't make it possible, but a jolt of urgency or intensity, even outright hilarity, was desperately needed and ultimately found wanting.

Watch this one for its goofy gangsterisms, as an uncanny mirror into Korean society, for a lesson in deus ex machina at its worst, and for the enjoyment of watching 'elite' businessmen and thugs slugging it out again, again, and again.