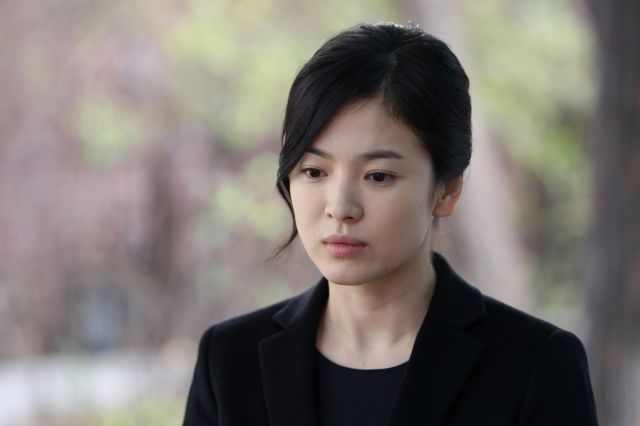 Da-hye (played by Song Hye-kyo) lives happily with her boyfriend Sang-woo (played by Ki Tae-young). A freakish turn of events separates the couple. Da-hye deals with the trauma by trying to forgive the person responsible for what happened to Sang-woo, although this process turns out to be surprisingly unsatisfying and pointless. That much is a fairly accurate description of "A Reason to Live" as a whole. Some of its ideas are good, but almost nothing of consequence is done with them.

A lot of this is just a matter of poorly defined character relationships. Take Ji-min (played by Nam Ji-hyun), a teenage girl who's the sister of Ji-seok (played by Song Chang-eui) and escapes the generally abusive nature of her family by running off to Da-hye's apartment regularly. It turns out that Ji-seok was Sang-woo's friend, and through the transitive property of character relationships, that also means Ji-min is emotionally close to Da-hye.

Bear in mind I'm guessing about most of this stuff. "A Reason to Live" is pretty fantastically vague about who its characters are and what their relationships are with each other. This is a movie badly in need of some basic narrative exposition. It takes a surprisingly long time just to clearly establish what exactly happened to Sang-woo, which is fairly inexcusable considering all the characters at the beginning of the movie know exactly what happened to Sang-woo, and it's only through non-intuitive use of flashbacks that this information is unnecessarily hidden from the viewer for so long.

But the bigger problem than that is simply how Da-hye's story lacks any kind of clear narrative arc. Da-hye spends most of her screentime investigating the generally unsatisfying nature of forgiveness through her documentary project. There's clear potential here, since Da-hye herself has these ambiguous feelings. Yet Da-hye has surprisingly little apparent emotional reaction to the oftentimes heartfelt and vicious interviews she tapes, rendering her little more than a cipher.

The Ji-min storyline similarly goes nowhere. I kept expecting that Da-hye's emotional journey and physical research would eventually have some sort of impact on Ji-min's problems. Yet there too Da-hye is a curiously disinterested outsider, who allows Ji-min's emotional issues to fester while ultimately making no meaningful effort to engage either Ji-min or Ji-seok in what's happening. If there's a parallelism between Da-hye and Ji-min's stories, well, I ended up missing it.

The only narrative thrust I can come up with for "A Reason to Live" is that forgiveness is bad, and we're better off hating people. I'm not necessarily averse to such a cruel message, but writer/director Lee Jeong-hyang makes this case very half-heartedly, as if she herself does not find it to be a very convincing one. Sometimes the mere react of raising difficult philosophical questions can elevate a film even if answers are not immediately available. But in the case of "A Reason to Live", the soft non-confrontational tone of the direction coupled with the genuinely cruel implications of the script are at cross-purposes, ultimately preventing the film from doing anything all that noteworthy.

"A Reason to Live" is directed by Lee Jeong-hyang and features Song Hye-kyo, Nam Ji-hyun, Song Chang-eui and Ki Tae-young.

"[HanCinema's Film Review] "A Reason to Live""
by HanCinema is licensed under a Creative Commons Attribution-Share Alike 3.0 Unported License.