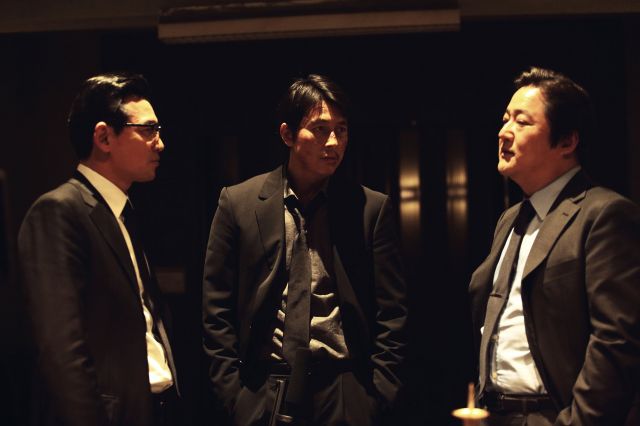 Former cop Do-kyeong (played by Jung Woo-sung) lays out the basic theme of "Asura: The City of Madness" pretty clearly in the opening narration panorama above his local wasteland. People are terrible. And we should hate them all. Every last one. Especially Sung-bae (played by Hwang Jung-min), the crooked mayor who Do-kyeong works for on account of needing the money. All right, then, what about the anti-corruption unit, led by Cha-in (played by Kwak Do-won)? Never mind, he's just as savage as Sung-bae. Maybe action rookie Seon-mo (played by Ju Ji-hoon) can inspire some optimism? Ha ha, no.

"Asura: The City of Madness" is the kind of movie that seems to exist for no other purpose except to remind us that the world is a miserable place and we're all doomed. It's hard to imagine what else director Kim Seong-su could have possibly been going for. The camera constantly just moves away from one repulsive character to another, the main difference being the specific brand of degrading nihilistic abuse employed by the one currently in focus.

With Sung-bae, the drug of choice is explicit power trip. He parades around half-naked in front of subordinates screaming like a crazy person mostly because he knows no one has the guts to make him stop. Cha-in likes to be the chessmaster who's in control of everything behind the scenes- and unsurprisingly is somewhat nicer to his subordinates, even while being unnecessarily brutal to everyone else. Seon-mo does the dirty work- that is, he's the immediate impetus for most of the film's more grotesque scenes of violence.

Do-kyeong...has surprisingly little to do with any of this. His role in the story is to just be jerked around between Sung-bae and Cha-in until finally the poor man snaps. While Do-kyeong is fairly indifferent to the actual goals of the three antagonists, they're such genuinely repugnant people on a personal level that Do-kyeong ultimately manages to power himself through the sheer power of spite alone.

Yet even Do-kyeong isn't all that likable. Sure, he's got a sick wife. But, well, that's really about it. Director Kim Seong-su is so obsessed with making the villains unpleasant he never really gets around to giving anyone else any kind of sympathetic characterization. After a certain point simply wanting horrible characters to die stops being sufficient inducement on its own. As Seon-mo's character demonstrates, whoever replaces Sung-bae and Cha-in is probably going to be just as bad as they are, if not worse.

If you're looking for an ultra-dark violent crime thriller the production values are certainly above average. All the same, I happen to be one of those people who like it when highly stylized movies have some sort of actual point. If you squint really hard you might be able to squeeze some subtext out of the film's plot, which has to do with property development deals, but honestly, this is window-dressing. "Asura: The City of Madness" is about godlike action movie stars battling each other for the sake of battling each other. Nothing more, nothing else.

"[HanCinema's Film Review] "Asura: The City of Madness""
by HanCinema is licensed under a Creative Commons Attribution-Share Alike 3.0 Unported License.