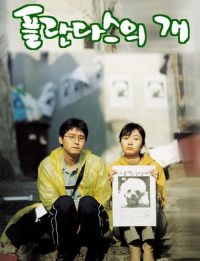 Back in 2000, Bong Joon-ho made is directorial debut with the underrated "Barking Dogs Never Bite". This gloomy satirical drama failed to have any pull at the box office at the time and even Bong Joon-ho noted, "It was a total flop". Its lack of commercial success is a shame because the film carries itself beautifully.

It's the story of a frustrated and pliant low-level university lecturer (Lee Sung-jae as Yun-ju) who has aspirations of moving up in the world. However his own personal happiness and sense of fulfilment are absent as he goes about doing what he has to in order to secure the prestigious position. Yun-ju feels the pressure to secure the job from his co-workers as well as his bossy and domineering wife makes his home life even less pleasurable.

In a moment of pure frustration, he abducts an annoyingly yappy dog by locking it in a wardrobe in his apartment's basement. Meanwhile a young girl goes to the apartment's office to get her missing dog flyers authorised. Hyeon-nam (Bae Doona) is the free spirit that helps her, but when more dogs go missing at the apartment complex, she begins to dream of fame by catching the perpetrator.

The two characters' paths cross a number of times. Firstly when Hyeon-nam watches from an adjacent apartment as Yun-ju literally hurls a small dog off the roof of his apartment in dramatic fashion. She decides to cease the moment and almost manages to catch Yun-ju. However she was unable to see his face and the two meet again when Yun-ju, in a terribly ironic and comical series of events, has to locate his bossy wife's newly acquired dog or "face death" from his all too serious wife. Both characters' dream of more, and as their stories play out we come to understand that external pressures and norms can still leave one with a strong sense of longing and emptiness. All that both Hyeon-nam and Yun-ju crave is a walk in the mountains, yet only one of them will find themself there. 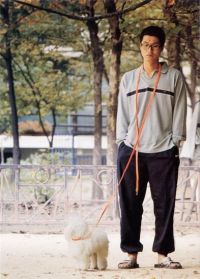 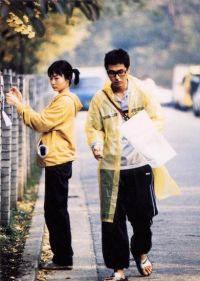 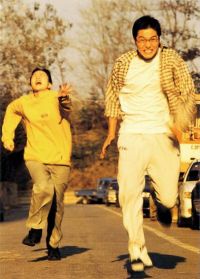 "Barking Dogs Never Bite" has some amazingly dark and hilarious moments. The visuals in the film do most of the storytelling (e.g. colour motifs, jocular mise-en-scene, unexpected special effects). The turbulent music (especially during the chase scene) felt initially overwhelming but once I found myself immersed in the tone of it all it was a welcomed and whimsical addition to Bong Joon-ho's brilliant directorial debut.  If you have enjoyed Bong Joon-ho's other critically acclaimed offerings ("Mother - 2009", "The Host", and "Memories of Murder) then "Barking Dogs Never Bite" will not disappoint.